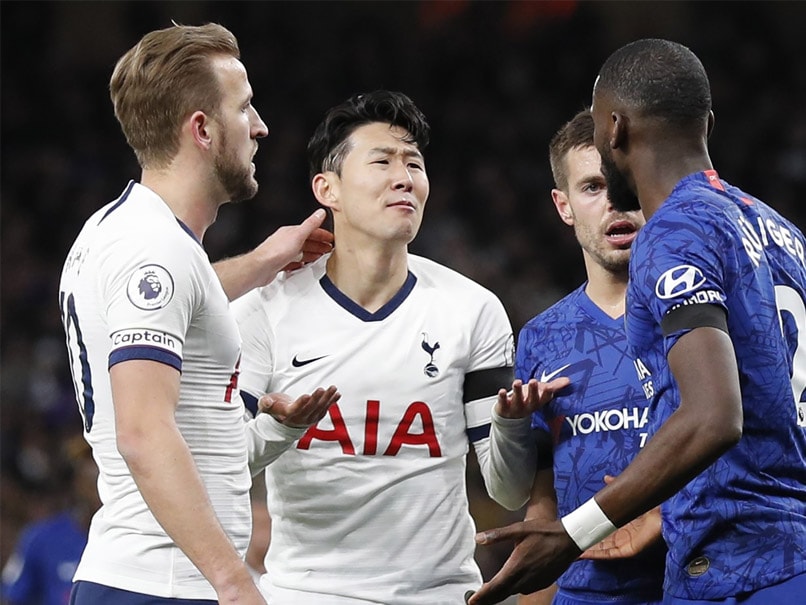 Antonio Rudiger had been involved in a clash with Son Heung-min during the match.© AFP

The latest racism row engulfing English football took a fresh turn on Monday amid reports Tottenham Hotspur's Son Heung-min as well as Chelsea's Antonio Rudiger had been abused by spectators during Sunday's fractious London derby. Chelsea's 2-0 Premier League win at the Tottenham Hotspur stadium saw referee Anthony Taylor halt play during the second half when Rudiger complained of hearing monkey noises from spectators. Moments earlier, the Chelsea defender had been involved in a clash with Son that saw the South Korean sent off.

But late Monday a report on the website of Britain's Guardian newspaper said a Chelsea supporter had been arrested for racially abusing Son on Sunday.

London's Metropolitan Police told AFP an arrest concerning a possible racially aggravated public order offence, without specifiying if the person in question was a supporter of either club.

A force spokesman added: "Police were made aware of alleged racist chanting during the second half of the Tottenham vs Chelsea match on Sunday, 22 December.

"Officers will work with the club in an attempt to identify any people responsible."

Meanwhile Tottenham, having promised a thorough investigation of the Rudiger incident, said Monday their initial inquiries had failed to find a culprit despite "many hours" reviewing images from stadium video cameras and having professional lip-readers study the footage.

Tottenham insisted any fan found guilty would receive a lifetime ban, but stressed: "At this time, however, we should point out that our findings are inconclusive".

Shortly after the stoppage brought about by Rudiger's complaint, Taylor halted play and spoke to both managers, Jose Mourinho and Frank Lampard, while an announcement over the stadium's public address system warned "racist behaviour among spectators is interfering with the game".

The announcement was repeated, with Tottenham saying this had created a "misconception that any issue was ongoing" because Taylor had implemented the first stage of European governing body UEFA's protocol for dealing with racist incidents, rather than the equivalent Premier League regulation.

After the match, Rudiger tweeted: "It's just such a shame that racism still exists in 2019.

"When will this nonsense stop?" the German added.

England's Professional Footballers Association, called late Sunday for a government inquiry into racism within football, adding its members were "on the receiving end of the blatant racism that is currently rife in the UK, but they are not alone".

A Downing Street spokesman responded Monday by condemning "racism of any kind.

"Clearly there remains more work to be done by the football authorities in tackling this issue and we are committed to working with them on this to stamp it out."

Sports minister Nigel Adams, following talks with football officials, said the government would wait to see how the game dealt with the issue "before deciding on any further action".

UEFA chief Aleksander Ceferin insisted earlier this month his organisation was working to tackle the rising problem after several incidents across the continent including the hurling of racist abuse at England players during a match in Bulgaria.

"Maybe we have to empower the players to walk off the pitch and stop the entertainment while it is happening," he added.

Chelsea boss Lampard said any walk-off "would depend on what the players were feeling and saying".

"But I would be absolutely, 100 percent behind them if (they wanted to walk off)," he said.

Spurs boss Mourinho also condemned racism but still took a swipe at Rudiger, accusing him of play-acting by clutching his ribs to get Son sent off.

"We need to eradicate any form of discrimination and in this case we are talking about racism," Mourinho said Monday. "Football and society needs help."

Son Heungmin Antonio Rudiger
Get the latest updates on T20 World Cup, check out the T20 World Cup Schedule and Live Score . Like us on Facebook or follow us on Twitter for more sports updates. You can also download the NDTV Cricket app for Android or iOS.