Manchester United moved into seventh place, just four points behind fourth-placed Chelsea in the race to qualify for the Champions League. 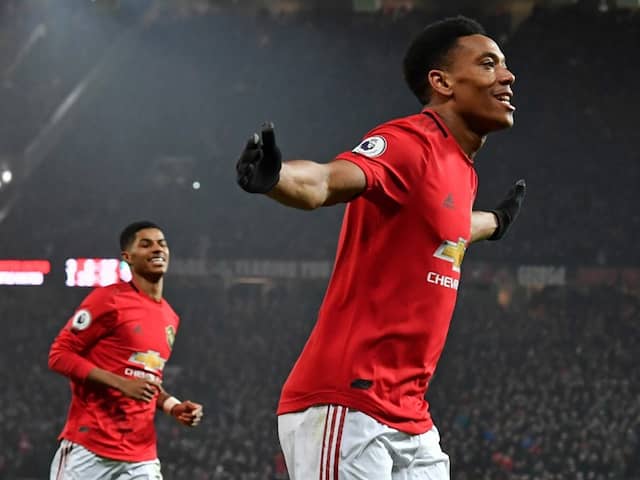 Ole Gunnar Solskjaer urged Manchester United to show some consistency after Anthony Martial's double and a Mason Greenwood rocket sealed a 4-1 win against Newcastle United. Solskjaer's side slumped to an embarrassing 2-0 defeat at lowly Watford last weekend to raise fresh questions about the United manager's ability to inspire his players. When Matty Longstaff put Newcastle ahead in the first half on Thursday, Solskjaer's critics were sharpening their knives again. But Martial rode to Solskjaer's rescue with the equaliser and Greenwood's thunderbolt put United ahead before Marcus Rashford rounded off a first half blitz.

Martial netted again after the interval as United ended a two-match winless run in the Premier League and moved into seventh place, just four points behind fourth placed Chelsea in the race to qualify for the Champions League.

"The players bounced back really well. So let's see how they cope with probably some praise now and then there's a game in 48 hours against Burnley away," Solskjaer said.

"It was a good day for us, we made it comfortable. Of course you make mistakes but we had 10 to 15 minutes of everything going right.

"That's one of the big things from today, the pressing. We need to be pressing high with a lot of intensity and then the opposition will make mistakes."

United's failure to match the levels they showed in their recent win at champions Manchester City during lacklustre efforts against Watford and Everton had put Solskjaer's future in the spotlight again.

The Norwegian insisted he retains the support of United owners the Glazer family, but he could hardly afford another setback against mid-table opponents like Newcastle.

Scott McTominay tried too hard to set the tone for United when he crunched into a studs-high tackle on Sean Longstaff that earned him the fastest Premier League booking of the season after just 40 seconds.

That was part of a spluttering start from United and Dwight Gayle should have put Newcastle ahead from Joelinton's pass, but the striker blazed high into the Stretford End.

It was a warning that Solskjaer's men failed to heed as Newcastle took the lead in the 17th minute.

Matty Longstaff had scored the winner against United on his Premier League debut in October.

The 19-year-old midfielder was making just his third appearance since that dream debut at St James' Park and this was his first goal since.

Stepping past Luke Shaw, he produced a fine low finish after Joelinton showed impressive composure to tee up Longstaff inside the penalty area.

Now without a clean-sheet in 14 league games, United needed a quick response to lift the gloom and Martial got a helping hand as he delivered the equaliser in the 24th minute.

Andreas Pereira's neat lay-off from Shaw's pass gave Martial a sight of goal and French striker's low shot squirmed under a weak attempted save from Martin Dubravka at his near post.

Newcastle had contributed to their own downfall on that occasion and Greenwood punished more sloppy defending to put United in front in the 36th minute.

Greenwood, making just his third Premier League start, has been one of the few bright spots in a frustrating season.

The 18-year-old showcased his vast potential when he seized on Fabian Schar's wayward pass and crashed a sublime strike past Dubravka from 20 yards for his eighth goal of the season.

United had all the momentum and increased their lead in the 41st minute, with Rashford climbing highest to power a header into the roof of the net from Aaron Wan-Bissaka's pin-point cross despite Newcastle appeals for a foul in the build-up.

Following Rashford's 15th club goal this season, Solskjaer sent on Pogba at half-time for his second appearance since returning from a lengthy ankle injury.

Martial who put the result beyond doubt in the 51st minute, intercepting Sean Longstaff's woeful attempted back-pass and clipping his shot over Dubravka.

Chelsea Marcus Rashford Anthony Martial English Premier League Football
Get the latest Cricket news, check out the India cricket schedule, Cricket live score . Like us on Facebook or follow us on Twitter for more sports updates. You can also download the NDTV Cricket app for Android or iOS.