Liverpool manager Brendan Rodgers insists Andy Carroll will not be allowed to leave Anfield on loan, but he won't rule out selling the England striker at the right price. 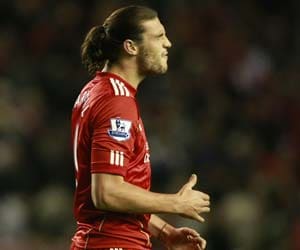 Liverpool manager Brendan Rodgers insists Andy Carroll will not be allowed to leave Anfield on loan, but he won't rule out selling the England striker at the right price.

Rodgers is believed to have rejected an approach from Carroll's former club Newcastle to re-sign the 23-year-old on a season-long loan earlier this month.

Carroll's future at Liverpool remains uncertain however as Rodgers has made it clear he will listen to offers for the player.

"There is talk of him going on loan, but there is absolutely no way I would be looking to loan a player like that, especially after the investment the club have paid," Rodgers told Sky Sports News.

"But his condition will be the same as every player. If an offer comes in for any player at the club we would either look at it, or dismiss it, and Andy's no different to that."

It is thought the burly targetman might be a bad fit for Rodgers' smooth passing style, yet the Liverpool chief has been keen to reassure Carroll that he would be given a chance if he does end up staying at Anfield.

"I've spoken openly and honestly with Andy in terms of where he is at, but I have done the same with all of the players, I have spoken to all of them, I have had communication with all of the group," Rodgers said.

"It gets highlighted more with Andy because he is a young player. Maybe others may not see him fitting in with me, but for me he is an important part of the group."

Meanwhile, Rodgers will be relieved to hear that Liverpool principal owner John Henry doesn't expect the Reds to qualify for the Champions League in the forthcoming season.

The American admits he expected better last season but now he is fully aware of the size of the rebuilding job facing Rodgers.

"We don't want to put any pressure on Brendan by saying you have got to make the Champions League this year," Henry told the Liverpool Echo.

"Of course he wants to make the Champions League, we all do and so does every team in the Premier League.

"I thought it was realistic last season but we were so far off that pace.

"At this point we're just trying to get things stabilised - that should be one of our goals."

Rodgers is the third manager since FSG, owners of Boston Red Sox baseball franchise, took over in October 2010 and Henry admits they have had to get up to speed with their first foray into football.

"We didn't know a lot at the start," he said. "We have had something like 20 months to study and learn and this is really the direction we want to go in.

"We are working on a long-term programme and we are fully committed to this programme."