West Ham striker Andy Carroll is likely to be ruled out of England's World Cup qualifiers against Moldova and Ukraine after suffering a hamstring injury during Saturday's 3-0 win over Fulham. 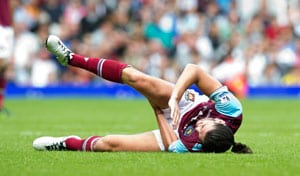 West Ham striker Andy Carroll is likely to be ruled out of England's World Cup qualifiers against Moldova and Ukraine after suffering a hamstring injury during Saturday's 3-0 win over Fulham.

Carroll made a strong debut for the Hammers after his loan move from Liverpool, but his first appearance at Upton Park was marred when he limped off midway through the second half.

Hammers boss Sam Allardyce fears the 23-year-old has strained his hamstring and that would make it unlikely he will be fit in time for England's opening qualifier in Moldova on Friday and the clash with Ukraine at Wembley the following week.

Carroll had been expected to feature heavily in England coach Roy Hodgson's plans for the two matches after Manchester United striker Wayne Rooney was ruled out with a thigh gash.

"It's a huge result but the only real disappointment for us is Andy might have tweaked a hamstring," Allardyce told Sky Sports.

"It is hugely disappointing if that's the case but it will be unlikely he goes (away with England).

"I don't think he's much chance - sadly for Roy (Hodgson) and sadly for us. It depends on the extent of the damage.

"He is desperate to play football. We had Carlton Cole warmed up and ready to go and Andy was going to be substituted anyway in the next couple of minutes. But unusually he did it (injured the hamstring) on the jump."