Eriksen, making his first appearance since his move from Ajax, played a part in both goals during Spurs' 2-0 victory over Norwich. 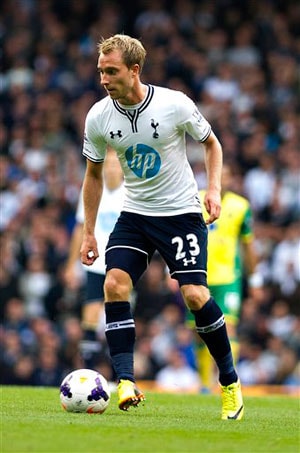 Eriksen, making his first appearance since his move from Ajax, set up Gylfi Sigurdsson's opening goal on Saturday before having a hand in the Iceland midfielder's second goal.

It was Spurs' first league goals from open play this season and also meant three points in their first game since Gareth Bale's departure for Real Madrid.

Eriksen has been brought in for £11.5 million (13.7 million euros, $18.3 million) to provide creativity in Bale's absence and the Dane made an immediate impact.

"It was a great debut for Christian," Villas-Boas said. "For a player of his age, he has great experience and he's a pure number 10, a creative player. His individual quality made a difference.

"He bonded very easily. When you have individual quality you are able to jump into a team straight away."

The first goal came in the 28th minute when Eriksen teed up Sigurdsson with a fine pass.

The second goal arrived four minutes after the break when Eriksen fed Paulinho, who crossed for Sigurdsson to tap in.

"Sigurdsson was man of the match for me. He returned with a dead leg from international duty but made himself available. He has a great attitude," Villas-Boas added.

Villas-Boas is hoping the victory will help his new signings settle in at the club.

"It's very early but I want to gather as many points as we can up to the October international break," he said.

"But we have a difficult trip to Cardiff and then a game with Chelsea. It's a better start than last season but I hope it means we don't have a blip later.

"It was a very good performance from the team, outstanding. We had so many levels of quality. We dominated physically and tactically."

Norwich boss Chris Hughton was also impressed with Eriksen's performance, adding: "I think Eriksen is going to be a real star.

"At 21 he must have 40 caps for Denmark and have played 150 games. He's almost an experienced young player."

He has demanded a response from his own team -- beaten for the second time this season -- when they play Watford in the League Cup in midweek.

"We're hurting and we need to respond," Hughton said. "We'll go through the video and see if we can improve, and we have to make sure we do. We needed to be better in possession.

"I'm disappointed we didn't give them a better game but Tottenham are a team who are going to be challenging."