Press reports in Britain have suggested that the Londoners are close to snapping up the forward for a club record 18 million pounds. 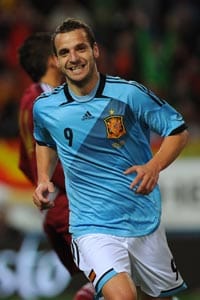 Tottenham manager Andre Villas-Boas said on Tuesday Spurs are in talks to sign Valencia and Spain striker Roberto Soldado, but denied that a deal was imminent.

Press reports in Britain have suggested that the Londoners are close to snapping up the forward for a club record 18 million pounds ($28 million).

Speaking in Hong Kong, where Spurs face Sunderland on Wednesday in the Barclays Asia Trophy, Villas-Boas said: "At the moment, he's just one of the players we are interested in.

"It's not a lie to anybody that we've been looking for a striker to strengthen our squad and to have more strength in depth. Roberto is one of the players we have been following and his career speaks for itself. He's a great striker.

"But there isn't a deal being struck at the moment, it's just interest and conversations."

If Soldado, 28, does join it could spell the end at Spurs for one or both of the club's current forwards Jermain Defoe and Emmanuel Adebayor.

Villas-Boas refused to confirm or deny whether Spurs had received a bid for Gareth Bale, the winger who has been linked with a move to Manchester United and Real Madrid.

"He's a player that we are willing to continue to have and he is one of the most fantastic players in the world at the moment," Villas-Boas said.

Bale will not feature against Sunderland after picking up a knock in training, the manager said, but will play some part on Saturday, when Spurs will face Manchester City or local side South China.

Villas-Boas said that Premier League teams needed to be "more aggressive" in the transfer market and declared himself pleased that Spurs, who narrowly missed out on Champions League football last season, were doing that.

"Man City and Chelsea have certainly done that and we are (also) doing it in a different way right now (compared with before), which is extremely important bearing in mind the preparations for the season," he said.

A top-four place in the Premier League -- which usually means Champions League football -- was the aim for the season, said the former Chelsea coach.

"Teams that compete for the title usually are Man City and Man United and Chelsea, you can add Arsenal too.

"To aim high and have high ambitions is normal. To have over-ambitions is something in the end that will leave you extremely frustrated. We want to fight to be better than last year and achieve Champions League qualification."