Alex Ferguson stunned the football world on Wednesday by announcing his retirement as Manchester United manager after 26 and a half years at the club. 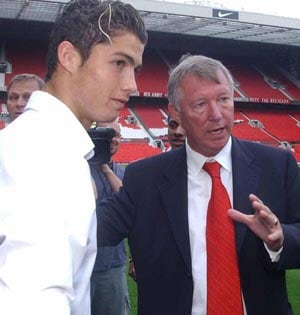 - Ferguson acquired Schmeichel for just over £500,000 ($775,000, 590,000 euros), but the giant blond Dane was to become the greatest goalkeeper in the club's history. A former handball player, Schmeichel dominated his penalty area with a physicality not witnessed before in English football and was renowned for his angry outbursts at United's defenders. He was the rock upon which United's success was built in the 1990s and he captained the side to Champions League glory in 1999 in the absence of the suspended Roy Keane.

- The catalyst for United's period of dominance under Ferguson, Cantona arrived from Leeds in a £1.2 million deal in 1992 and left five years later as an Old Trafford legend. The club had gone 25 years without winning the league prior to the Frenchman's arrival, but they claimed the inaugural Premier League title in his first season at the club. A league and FA Cup double followed in 1994, before Cantona was banned for eight months after launching a kung-fu kick at a Crystal Palace fan in January 1995. However, Ferguson stood by his mercurial Frenchman, who returned to inspire the club to two more league titles, as well as the 1996 FA Cup, before retiring abruptly at the age of 30 in 1997.

- The driving force in the heart of the United midfield, Keane embodied Ferguson's own ferocious will to win and became the manager's on-pitch lieutenant. He cost a British-record £3.75 million when he signed from Brian Clough's Nottingham Forest, but in his 12 years of service he amassed seven Premier League titles and four FA Cups. His most famous performance saw him selflessly inspire United to a rousing comeback win over Juventus in the 1999 Champions League semi-finals, despite having already received a booking that ruled him out of the final.

- Solskjaer was a complete unknown when he arrived from Norwegian club Molde in a £1.5 million deal, but he was to prove one of Ferguson's shrewdest acquisitions. 'The Baby-faced Assassin', as he became known in the British media, had a keen eye for goal and proved especially adept at scoring goals from the bench. He scored four goals in a substitute appearance at Nottingham Forest in 1999 and later that season claimed the famous injury-time winner against Bayern Munich in Barcelona that brought Ferguson the first of his two Champions League titles.

- After being tormented by a teenage Portuguese winger during a pre-season game in 2003, United's players urged Ferguson to sign him on the flight back after the game. Ferguson did, shelling out £12.24 million to take Ronaldo to Old Trafford, and he went on to become a United great. Initially dismissed as an over-elaborate flair player, Ronaldo was to develop into one of the most complete forward players the game has ever seen. He scored 42 goals as United claimed a league and Champions League double in 2008 before joining Real Madrid a year later, to Ferguson's great regret, in a world-record £80 million deal.