Sir Alex Ferguson will wait until the last minute before deciding whether new striker Robin van Persie is fit enough to make his debut in Manchester United's Premier League opener at Everton on Monday. 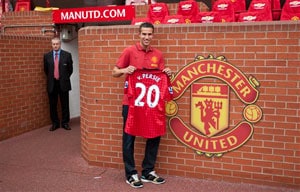 Sir Alex Ferguson will wait until the last minute before deciding whether new striker Robin van Persie is fit enough to make his debut in Manchester United's Premier League opener at Everton on Monday.

Van Persie, signed for £24 million from Arsenal, rushed back from international duty with Holland in midweek to undergo a medical in Manchester that went into the early hours of Friday before completing the most eye-catching Premier League transfer of the year.

After such a hectic schedule, and just a handful of training sessions with his new team-mates, United manager Ferguson is uncertain if he should throw van Persie straight into his starting line-up at Goodison Park.

"He hasn't played much. We are going to assess him the next couple of days and chat with him, see how he feels himself," Ferguson said.

"Adrenalin will help, if I choose to start him, but I think it's important he had a training session on Friday morning and hopefully the weekend will give me a good idea on whether he should start or I should put him on the bench."

Van Persie's arrival gives Ferguson, who could already call on Wayne Rooney, Javier Hernandez and Danny Welbeck, an impressive collection of attacking talent and the Scot believes Welbeck is just one player who will benefit from playing alongside such world-class performer.

"It's been a long haul but the point I'm making about maturity is we needed a finished player," Ferguson said.

"(Paul) Scholes and (Ryan) Giggs are coming to the end and I need mature top players to replace them.

"The young ones don't have what Scholes and Giggs do at the moment and that's very important.

"We have had several players who have been that sort of catalyst, starting with (Eric) Cantona, I don't think we're short of all that, I think we were still capable of winning the title without Robin but he gives us a sort of certainty for the future.

"You always learn from great players, if you look at what Cantona did, he was a tremendous teacher for the all the young players and I think Danny will welcome that.

"He will learn he won't play every week because he will get little niggles and strains, but when he's 23 or 24 he'll be a fantastic player and will learn from the other strikers here.

"We've got a great combination of strikers now, it will be difficult for me but it's better to have another great player rather than worrying if you've got the right player."

In the eyes of one rival manager, at least, the van Persie signing makes United strong favourites for the title although Ferguson was placing little credibility in the claims of Roberto Mancini, manager of defending champions Manchester City, who said precisely that.

"We are favourites every week according to him, does he not realise he's got a decent team himself," joked Ferguson.

"That rivalry has been going on 100 years, not just last year, neighbours are neighbours and these games never change. But if you ask me who I think will be our biggest threat I would say Man City without question."

Everton manager David Moyes believes Van Persie is a "seriously good" signing for United but does not intend to make it a debut to remember for the 29-year-old Dutchman.

Moyes is determined his players make a winning start to the campaign after losing their previous four opening day games.

"I think United have made some good signings, bought some young players and bought one who is maybe a little bit older than they normally do," Moyes said.

"But he's a seriously good player who you would expect will make a big difference. He will be a big help to an already good side.

"But we will be ready for Manchester United. We want to get the season off on the right note."

Comments
Topics mentioned in this article
Football Liverpool Everton Manchester City Alex Ferguson Mark Hughes Arsenal Chelsea Manchester United Wayne Rooney English Premier League
Get the latest updates on ICC T20 Worldcup 2022 and CWG 2022 check out the Schedule, Live Score and Medals Tally. Like us on Facebook or follow us on Twitter for more sports updates. You can also download the NDTV Cricket app for Android or iOS.