Ferguson relieved as no serious injury to Phil Jones

Manchester United manager Sir Alex Ferguson received a welcome boost on Friday after it was confirmed Phil Jones had not suffered a fractured cheekbone against Fulham. 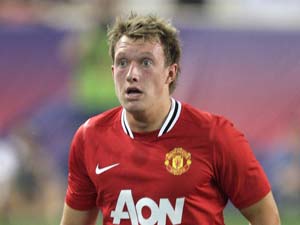 Manchester United manager Sir Alex Ferguson received a welcome boost on Friday after it was confirmed Phil Jones had not suffered a fractured cheekbone against Fulham.

England international Jones was forced to leave the field after 20 minutes of Wednesday's 5-0 rout of the Cottagers following a heavy aerial collision.

Jones underwent a scan on Thursday and it had been feared the defender had suffered a broken cheekbone in the clash.

However after no serious damage was revealed Jones could now be fit to face Wigan at Old Trafford in Monday's Boxing Day programme.

"Phil Jones should be okay for Monday," Ferguson said. "We feared the worst but there is no break."

However Ferguson revealed Ashley Young faced "a few weeks" on the sidelines after suffering a knee injury against Fulham. Defender Rio Ferdinand is also likely to miss Monday's game after injuring a foot in training.

"It's not so good about Ashley Young because he's going to be out for a few weeks. We're still waiting for some of the bleeding to go away, which is quite extensive at the moment," Ferguson said.

Ferguson praised his squad for taking the club's injury problems in their stride.

"The squad at the moment has handled the situation quite well and their form has been really good so I'm pleased with that and we're looking like scoring goals again which is terrific," the Scot said.

"I have nothing to say about that at all," Ferguson said.

The Rovers manager has faced constant protests from fans as his team has slumped to the bottom of the Premier League table under unpopular owners Venky's.

The abuse was so bad that Everton manager David Moyes walked out of Rovers' 2-1 defeat to Bolton on Tuesday in disgust.

United host Blackburn in the game after Wigan and Ferguson has attempted to contact Kean to offer his support.

"I haven't seen anything as bad as that and I fear for the lad. But he's held his dignity fantastically well," Ferguson said.

"I've seen his press conferences and he seems to be in complete control of himself and the events and it's remarkable under that kind of pressure that he can maintain his dignity the way he has done.

"I tried to phone him the other day but he was probably right keeping his phone off! But it's terrible to watch that.

"It doesn't say a lot for society these days when you see that kind of behaviour from fans. We're all emotional and we all like to see our team win but for goodness' sake, give the lad a break."