The England striker was left out of United's squad for Ferguson's final home match in charge, against Swansea in the Premier League on Sunday, and watched the game from an executive box with his family. 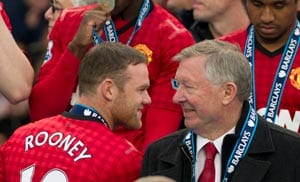 Outgoing Manchester United manager Alex Ferguson insisted Wayne Rooney won't be sold even though the striker handed in a transfer request after becoming "frustrated" at being substituted in recent matches.

The England striker was left out of United's squad for Ferguson's final home match in charge, against Swansea in the Premier League on Sunday, and watched the game from an executive box with his family.

"I don't think Wayne Rooney was keen to play, simply because he's asked for a transfer," Ferguson said after the match. "He wants to think it through in his mind, which is a good idea.

"We are not going to let him go but he is a little bit frustrated at being taken off once or twice in the last few weeks."

Rooney came onto the pitch after the final whistle, shook Ferguson's hands and joined in the celebrations during the presentation ceremony for United's 13th Premier League title.

With Ferguson retiring at the end of the season, Rooney's future is likely to be decided by new manager David Moyes, who will leave Everton to take charge of United on July 1.

Moyes sold Rooney to United in 2004 and then launched successful legal action against him over allegations in the striker's autobiography that the Scot leaked details of a private conversation to the media about the factors behind the move from Everton.

It's the second time Rooney has asked to quit United, having backed down from a transfer request in 2010 after negotiating a new and improved contract with the club.

"Sometimes as a player you make bad choices and bad decisions, and I think that's what happened," Rooney said last year.

Rooney is no longer first choice at United, slipping behind Robin van Persie in the list of strikers at Old Trafford this season and often playing in central midfield or having to settle for a place among the substitutes.

He was dropped for the second leg of the Champions League last-16 match against Real Madrid - arguably United's biggest game of the season.

Rooney has two years left on his contract at United.