Now the world will be watching as Ferguson takes charge of United at Old Trafford for the last time, while Moyes will also be under the microscope ahead of his official move to Manchester on July 1. 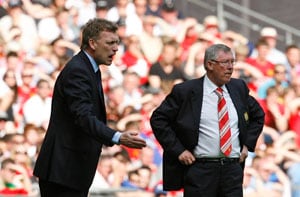 All eyes will be on Old Trafford and Goodison Park on Sunday as Alex Ferguson and David Moyes say their emotional farewells at the end of one of the most dramatic weeks in the history of the Premier League.

At the start of this week it was hard to imagine that Manchester United's apparently meaningless final home game of the season against Swansea and Everton's relatively mundane Goodison Park fixture against West Ham would captivate millions across the globe rather than just the supporters of the respective clubs.

But Ferguson's sensational announcement on Wednesday that he will retire as United manager at the end of the season after 26-and-a-half years in charge at Old Trafford and the subsequent appointment of Everton boss Moyes as his replacement on Thursday changed all that.

Now the world will be watching as Ferguson takes charge of United at Old Trafford for the last time, while Moyes will also be under the microscope ahead of his official move to Manchester on July 1.

There will be more than a few tears as the 71-year-old Ferguson bids farewell, but the overriding emotion should be joyous celebration of his incredible achievements at United.

It is fitting that the Scot will depart with one last piece of silverware officially installed in the Old Trafford trophy cabinet on Sunday when United will be presented with the Premier League trophy.

This season's title triumph was the 13th of Ferguson's reign and the 38th trophy won by United during his reign.

And United defender Rio Ferdinand believes that remarkable haul should offer reassurance to Moyes that the foundations are in place to extend the club's remarkable run of success.

"It's great to see the new manager coming in, we've never had a problem with him here at United, he's a very honest man from the players you speak to and he's done a fantastic job at his previous club Everton," Ferdinand said.

"I'm sure he'll be very, very open and sympathetic to the traditions of the club and try and continue that and not come in and try and make crazy changes in terms of the whole characteristics of the club."

While Moyes has effectively been hand-picked by Ferguson, who recommended the Scot to United owners, the Glazer family, the 50-year-old has never had to face the scrutiny he will be under at Old Trafford.

His 11-year reign at Everton has rightly earned him plenty of respect for his ability to construct a highly competitive team on a relatively limited budget.

But the lack of a single piece of major silverware and absence of Champions League experience are significant blots on his CV.

The Cheshire-cat grin on Moyes' face when he was photographed leaving the office of Everton chairman Bill Kenwright shortly before his appointment at United was confirmed suggested even he can't quite believe his luck.

Even so, his last home match as Everton manager gives fans a chance to thank Moyes for his lengthy service and defender Phil Jagielka made it clear he will be sorely missed.

"Like the rest of the squad I have nothing but the highest regard for David Moyes," Jagielka said.

"He is a first-class operator on and off the training ground and on behalf of the players I would like to place on record my thanks for the work he has done improving the team."

While the football world keeps tabs on Ferguson and Moyes, there are other important issues in the Premier League this weekend.

Chelsea's visit to Aston Villa on Saturday has significance at both ends of the table, with the third place Blues looking for the win that would effectively seal their place in next season's Champions League, while Villa can guarantee their survival with a victory.

Tottenham can't afford to drop points at Stoke as Andre Villas-Boas's fifth placed side try to keep the pressure on Chelsea and fourth placed Arsenal, who don't play this weekend due to Wigan's involvement in the FA Cup final.

Newcastle, three points above the bottom three, travel to already-relegated QPR in dire need of a win.

Norwich, at home to West Bromwich Albion, and Sunderland, who host Southampton, are level on points with Newcastle and equally desperate for three points.