Last year, a survey commissioned by Manchester United and carried out by market research firm Kantar estimated there were 659 million Manchester United fans worldwide with about half of them, 325 million, in Asia. 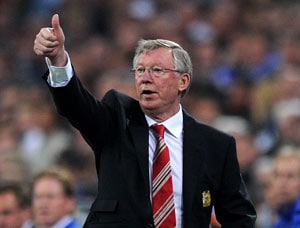 Asian fans from Singapore to Shanghai on Thursday praised Alex Ferguson's role in bringing Premier League football to the region's masses, after his shock retirement as Manchester United manager.

As the club's millions of Asian fans absorbed the news, splashed on front and back pages across the continent, they applauded Ferguson's regular visits and his signings of Park Ji-Sung and Shinji Kagawa.

"Whatever else he has done, he has brought football to Asia, to the people, because not many people can afford to go to Old Trafford," said Laurence How, secretary of Malaysia's official supporters club.

TV images of the gum-chewing Ferguson have been a weekly feature of Asian life since the globally focused Premier League's inauguration in 1992, with now ubiquitous sports bars often crammed with locals wearing United shirts.

Streets, malls, markets and slums are also dotted with the United crest and colours.

Last year, a survey commissioned by Manchester United and carried out by market research firm Kantar estimated there were 659 million Manchester United fans worldwide with about half of them, 325 million, in Asia.

"Most of the fans are devastated," said David Fan, general secretary of Reds in Shanghai, as supporters took en masse to China's popular, Twitter-style weibos, where the subject was trending.

"Like me, we didn't expect that. Most of us have been watching United for more than 10 years and it started with Sir Alex, so it's very hard for us to accept the fact. We've never seen the team without Sir Alex."

The Premier League's exploding popularity more than doubled overseas TV rights to 1.4 billion pounds ($2.2 billion) in 2010, and they are estimated to rise another 30 percent after the current round of negotiations.

In Asia, even the newly crowned president of the Asian Football Confederation, Bahrain's Sheikh Salman bin Ebrahim Al Khalifa, is a proud Manchester United fan, a fact proclaimed on his campaign website.

Manchester United have carefully cultivated their relationship with the continent, with Ferguson heading popular pre-season trips. Companies such as Toshiba, Singha beer and Hong Kong's PCCW are among their list of sponsors.

"Last summer I saw them in Shanghai and it was quite unbelievable," said Fan. "You see them on TV, and then they're live in front of you.

"You can talk to them and the feeling is unbelievable, because you love this team, it's part of your life."

How, of Malaysia, where the supporters' clubhouse is dotted with United memorabilia and has proudly hosted stars including Eric Cantona, said Ferguson's personal touch had also gone down well with Asian fans.

"There was a trip here and he asked us to turn up for the plane and gave us a chance to meet the players. He thinks about the supporters more than the commercial people," he said.

Supporters also cited the impact of signings like South Korea's Park, who thrived under Ferguson, becoming the first Asian to win Europe's Champions League and also the first to wear United's captain's armband.

Great things are also expected of Japanese international Kagawa, despite an injury-interrupted first season, after a string of influential performances and a hat-trick to his name already.

"The signings of Park and Kagawa brought excitement. People in Asia want to play football there too and now they know there's a chance," said Ken Lai, head of Singapore's official supporters club.

Shanghai's Fan said while many English clubs have had Asian players, there was no sense amongst fans that Ferguson's purchase of Park and Kagawa was driven by a desire to attract more Asian supporters.

"United have signed some Asian players like Park, like Kagawa and they used to have a Chinese player, Dong Fangzhuo, who didn't last that long," he said.

Asian fans will also be among the first to experience the new-look Manchester United when they tour Thailand, Australia, Japan and Hong Kong in July.