Despite Manchester United claiming a 3-0 victory at Aston Villa, Moyes was unhappy with the number of tackles made on the Belgian-born youngster. 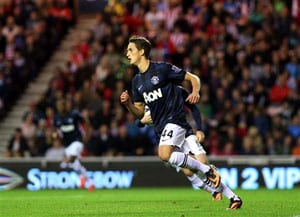 Manchester United manager David Moyes has called for referees to offer better protection to winger Adnan Januzaj despite seeing his side convincingly win 3-0 at Aston Villa.

Two goals in the space of three first-half minutes from Danny Welbeck and Tom Cleverley's 52nd-minute effort ensured the hosts were well beaten on Sunday as United won a first league game in five attempts.

But Moyes was unhappy with the number of tackles made on the Belgian-born youngster and wants referees to take action.

"I think he's been kicked in every game," Moyes said. "I don't know how many tackles he's had in the last two or three games.

"I'm annoyed with the fourth official and referees. Before you know it, the boy will get a sore one as he is definitely not getting protected by the officials.

"It's terrible what they are allowing to go on at the moment. This boy is an incredible talent. It's not necessarily the same player -- I think they are queueing up to see who will kick him next.

"There were that many tackles from different players. It's something the referees will have to think about as they are queueing up to kick him. Last week was exactly the same.

"It's up to the referees. That's their job: they are paid to referee the games and are professional. You would hope they would recognise that.

"He will just get up and walk away and get on. That's one of his biggest attributes, along with his outstanding ability. He will say: 'Come on, kick me, and I'll get up again.'"

Aston Villa manager Paul Lambert refuted the allegation that his side were heavy-handed.

"We're not a physical side. We are a young side who are over-exuberant," he said. "I never set out anyone to try and kick anyone.

"It was not an over-aggressive game. There were challenges that people were entitled to go for."

Moyes was nonetheless pleased to finally end his side's disappointing run in the league and he is now focusing on an improved Christmas period to take his side back into the Champions League places.

"We're getting closer to it, but it has to be more consistent and I'm still looking to improve again," he said.

"The all-round performance was more like it and I'm pleased with that. To be fair to Aston Villa, they had a couple of shots early, but after that we played well.

United were also able to hand midfielder Darren Fletcher his first 20 minutes of action in 2013 following a long absence due to a chronic bowel problem.

"Darren got a good reception, and rightly so," said Moyes. (Fletcher thanks fans)

"Anyone who can return from illness like that deserves it after the time he spent in hospital and other places. Most importantly, he did not look out of place and I don't think he gave the ball away once."

Villa's home record of just one league win all season is becoming a concern for Lambert, who was unhappy about the nature of the goals his side let in.

"I thought we started really well. That's as well as we've started for a number of weeks," he said. "Everything looked decent.

"But it was disappointing with the goals we conceded. And the first we should have stopped the cross. But they are clinical.

"We have to get more wins at home. There's no point feeling sorry for yourself."