A second-half brace from Adam Le Fondre saw Reading come from behind to beat high-flying Everton 2-1 on Saturday and record their first win of the Premier League season. 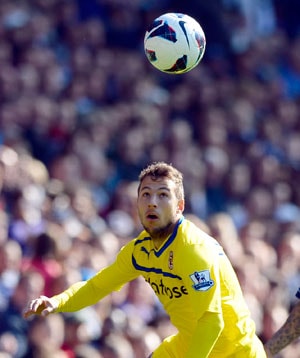 A second-half brace from Adam Le Fondre saw Reading come from behind to beat high-flying Everton 2-1 on Saturday and record their first win of the Premier League season.

Everton led at half-time through an early Steven Naismith effort but Le Fondre equalised with a header early in the second half and then claimed the winner from the penalty spot after he was fouled by Seamus Coleman.

The victory lifted Brian McDermott's side out of the Premier League relegation zone at the expense of Aston Villa, while Everton slipped one position to fifth and conceded fourth place to West Bromwich Albion.

Despite Reading's desperate need for points, it was Everton who tore out of the starting blocks at the Madejski Stadium.

Reading goalkeeper Adam Federici had to save from Phil Jagielka inside two minutes, with Nikica Jelavic blazing over after the ball was fed back into the box.

Everton took the lead in the 10th minute amid woeful defending by the home side, who spurned several chances to clear before Marouane Fellaini nudged the ball on for Naismith to score from close range.

Le Fondre spurned a chance to equalise when he shot over after beating Everton goalkeeper Tim Howard to a long ball, but Everton quickly reasserted themselves.

Kaspars Gorkss was fortunate not to concede a penalty for a rash challenge on Naismith, while Federici had to parry from Thomas Hitzlsperger and then produced a superb sprawling save to thwart new England cap Leon Osman.

Everton had another penalty appeal turned down when referee Martin Atkinson failed to spot an apparent handball by Sean Morrison, while Jay Tabb had to clear a Jagielka header off the line just before the interval.

The first half had been all Everton, but the hosts hit back six minutes into the period when Le Fondre met Nicky Shorey's appetising free-kick with a fine header that found the top corner.

Le Fondre headed narrowly wide from another Shorey set-piece and then gave Howard a couple of nervous moments with a pair of strikes that narrowly missed the target.

An engaging contest would ultimately be settled by a rash decision from Coleman, who bundled into Le Fondre to gift Reading a 79th-minute penalty.

Le Fondre dusted himself down and drilled the ball down the centre of the goal to put Reading ahead.

Fellaini hit the post with a header as Everton pushed for an equaliser but Reading would not be denied a first Premier League win in over four years.