Alex Carey did make decent connection but, Daniel Sams, standing at deep mid-wicket, took a couple of quick steps and then flew towards his left side to pluck an absolute blinder 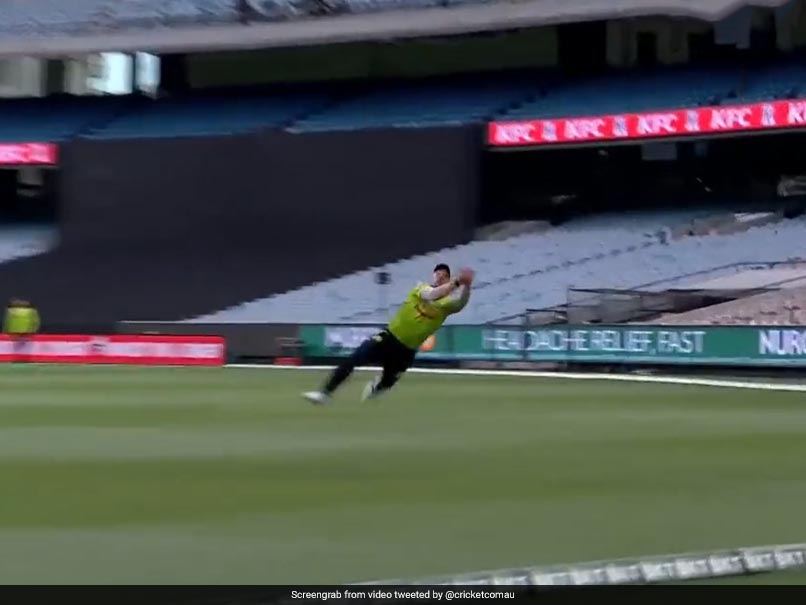 Australia all-rounder Daniel Sams defied the odds of gravity after he pulled off a flying catch in the deep during the Big Bash League (BBL) playoff match between the Sydney Thunder and the Adelaide Strikers at the Melbourne Cricket Ground (MCG) on Sunday. In the 5th over of the Strikers' inning, wicketkeeper-batter Alex Carey tried to go for a big hit after Tanveer Sangha had given the ball a lot of air. Carey did make decent connection but, Sams, standing at deep mid-wicket, took a couple of quick steps and then flew towards his left side to pluck an absolute blinder.

However, the former RCB and Delhi Capitals players gave a "subdued reaction", having dropped a much easier catch few moments ago.

A video of the catch was uploaded by BBL on their official Twitter handle.

Don't let his subdued reaction fool you. Daniel Sams makes up for his earlier drop with a hanger in the deep!

The Strikers, after winning the toss, elected to bat first against the Thunder in the first playoff.

The Adelaide-based outfit started off well with Carey and Matt Short adding 41 runs in the first 4.2 overs.

While Carey was dismissed for 23, Short and Ian Cockbain continued to led the charge for the Strikers, adding 50 runs for the next wicket.

Jason Sangha got the better of Short (39) but Cockbain continued his vigil, smashing a 38-ball 65 as the Striker managed to post a total of 184 for six in 20 overs.

In reply, the Thunder could only manage 178 for six and fell short by six runs. Sangha and Alex Ross struck quickfire fifties for the Thunder but it was not enough to take them over the line.

Melbourne Cricket Ground Cricket
Get the latest updates on India vs South Africa and check out  Schedule, Results and Live Score. Like us on Facebook or follow us on Twitter for more sports updates. You can also download the NDTV Cricket app for Android or iOS.