ISL: Ahmed Jahouh was shown a red card for a lunging tackle in Mumbai City's defeat to NorthEast United. 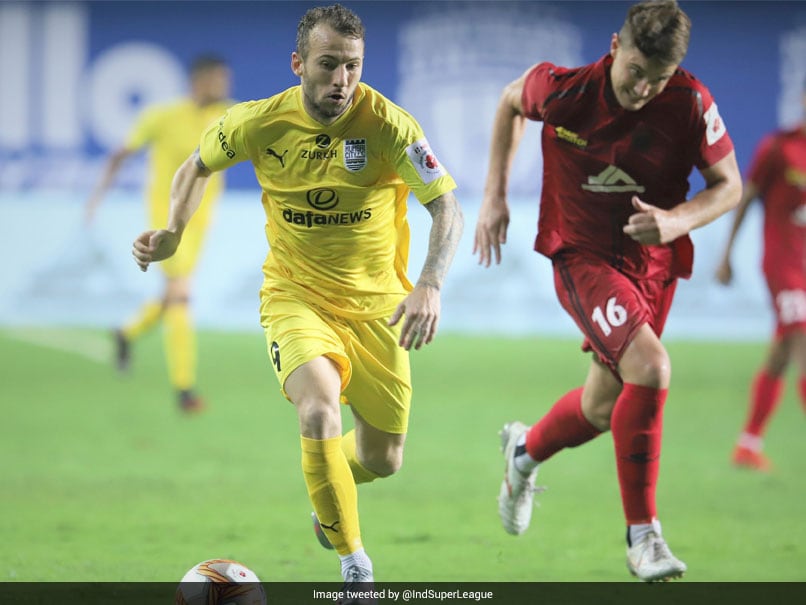 NorthEast United FC made a winning start in the seventh season of the Indian Super League (ISL) after a 1-0 win over Mumbai City FC at the Tilak Maidan Stadium in Vasco on Saturday. Mumbai dominated the ball in the opening period but lost Ahmed Jahouh after he was given his marching orders in the 43rd minute. The second half saw Kwesi Appiah score the only goal of the match from the penalty spot to help the Highlanders bag three points.

The entire complexion of the contest, though, changed two minutes from halftime and the momentum shifted in NorthEast's favour after Jahouh was shown a straight red by the referee because of a lunging tackle from behind.

The Islanders to their credit stayed true to their game plan and intricate style of play despite the sending-off as the teams went into the break with the match still goalless.

NorthEast FC began the second half on the front foot and were rewarded with a penalty after Borges was adjudged to have handled the ball inside the box. Appiah stepped up to the spot to take the penalty and calmly sent the goalkeeper the wrong way to give his side the lead in the 49th minute.

Mumbai continued to push forward in search of a goal but NorthEast defended resolutely to thwart them time and again. Substitute Farukh Choudhary managed to get away a shot on goal for the Islanders in the 83rd minute but NorthEast's defence came up with a big block to ensure that they kept their lead intact.

NorthEast could have put the game to bed three minutes into injury time when they won possession and attacked at pace.

Substitute Imran Khan even got his shot away, but his effort didn't test the Mumbai goalkeeper. His miss didn't matter though as NorthEast smartly ran down the clock to pick up the win and maximum points.

Mumbai City FC Indian Super League Football
Get the latest updates on ICC Women's Cricket World Cup 2022 and IPL 2022, check out the Schedule , Live Score and IPL Points Table. Like us on Facebook or follow us on Twitter for more sports updates. You can also download the NDTV Cricket app for Android or iOS.