ISL: Bartholomew Ogbeche scored the equaliser for Hyderabad FC in a 1-1 draw vs SC East Bengal. 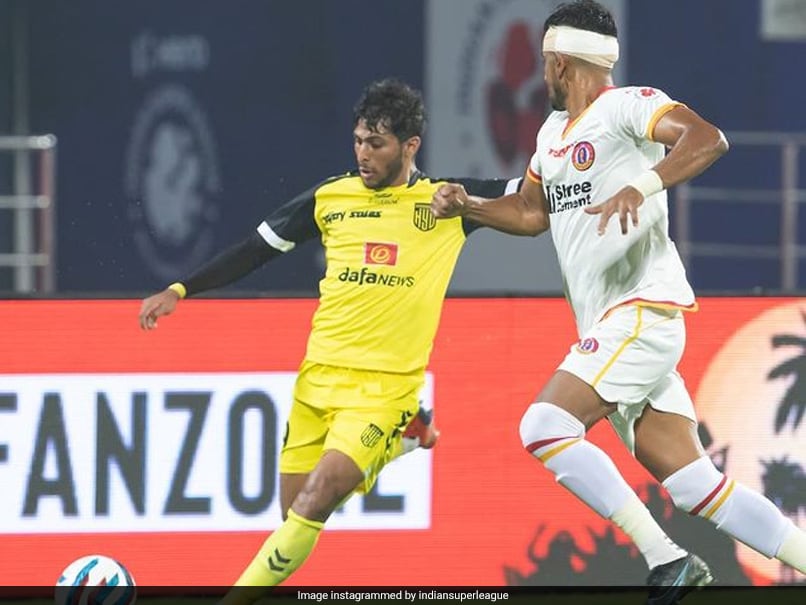 SC East Bengal held Hyderabad FC to a 1-1 draw but could not stop the Nizams from jumping into second place on the points table, in their 2021-22 Indian Super League fixture at the Athletic Stadium in Bambolim on Thursday. Hyderabad extended their unbeaten run to six matches but the Red & Gold Brigade remain winless in eight matches. Amir Dervisevic (20') gave SC East Bengal an early lead against the run of play with a brilliant free-kick but Bartholomew Ogbeche (35') scored with a header to bring the match level.

Joel Chianese was the first to test Arindam Bhattacharya in the 12th minute after a cautious start from both teams. However, it was SC East Bengal that went into the lead thanks to a powerful direct free-kick from outside the box by Amir Dervisevic.

The midfielder scored with a left-footed shot that caught Laxmikant Kattimani unawares, who should have done better in saving the attempt.

Daniel Chima Chukwu missed a fabulous opportunity to double his team's lead by sending his shot wide in a one-on-one situation just before the half-hour mark.

Post the drinks break, Hyderabad FC turned up the intensity and scored through Bartholomew Ogbeche. A pinpoint cross from the left flank by Aniket Jadhav found Ogbeche's head who easily directed the ball past the goalkeeper.

Minutes after the equaliser, Mohammad Rafique then blasted the ball against the crossbar with a powerful shot from outside the box after latching on to a layoff by Chukwu. Both teams went into the break on equal terms.

Manolo Marquez sent Sahil Tavora in Rohit Danu's place as a halftime substitute. The second half saw both teams cancel each other out and both tacticians made personnel changes to change the complexion of the game.

Raju Gaikwad was one of the players who suffered a blow to the head earlier in the match.

At the 85th minute mark, Sahil Tavora attempted a long-range attempt which made Arindam parry the shot away. The rebound from Siverio went wayward, to the goalkeeper's relief. The fourth official indicated seven minutes of added time for stoppages during the game.

Naorem Singh and Juanan got a yellow card each in the late stages of the match. Despite throwing everything in their locker at the opposition, neither side could find the winner and the game ended on even terms.

Hyderabad FC will play Odisha FC in their next at the Athletic Stadium on Tuesday while SC East Bengal has a long rest period before facing Bengaluru FC on Tuesday in the next year.

Hyderabad FC
Get the latest updates on ICC Women's Cricket World Cup 2022 and IPL 2022, check out the Schedule , Live Score and IPL Points Table. Like us on Facebook or follow us on Twitter for more sports updates. You can also download the NDTV Cricket app for Android or iOS.