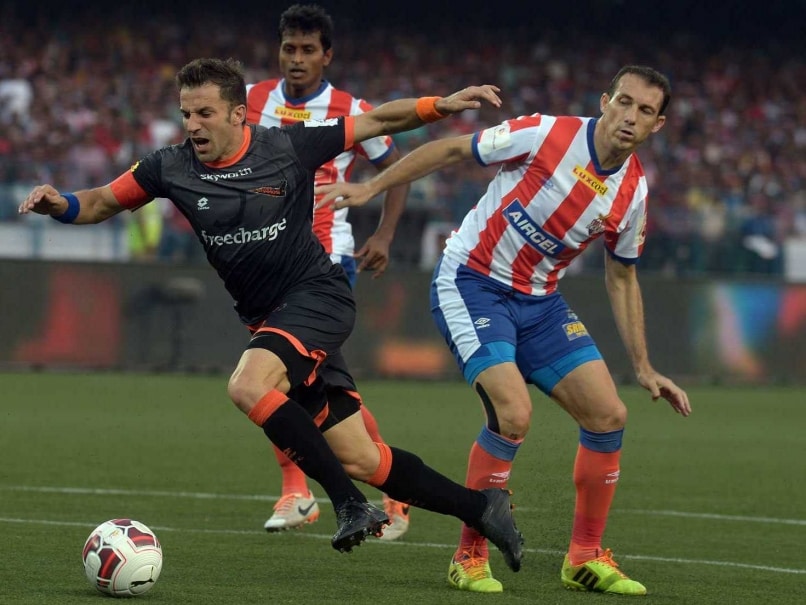 Delhi Dynamos in action against Atletico de Kolkata in the Indian Super League.

18:29 (IST): The match ends in a draw and the final score is 1-1. Kolkata finally concede a goal and the points are shared.

18:24 (IST): Four minutes of stoppage time as the two teams look for a late goal.

18:16 (IST): There is the outrageous clash between the players in the 83rd minute. Del Piero makes a challenge on Masih that ignites fire amongst the home side. Players surround the maestro, push him here and there before the goalie intervenes into it.

18:13 (IST): Alessandro Del Piero gets the ball on the left flank in the 79th minute, cuts in, dribbles to get past the defender and blazes it over the cross bar.

18:09 (IST): GOAL! Pavel Elias scores a long distance blinder in the 73rd minute! Alessandro Del Piero puts in a cross which is headed away to find Elias at the tip of the box. He takes a touch and smacks it with the outside half of his shoe to beat the outstretched arm of Roy. It has been only a week since the league has started and we have seen some stunning goals already. This one surely heads the chart. He also becomes the first player to score against the men in stripes and boy it needed a stunner to do that!

18:03 (IST): The fans are buzzing with excitement as the dying moments of the game approach with Kolkata still leading 1-0 vs Delhi.

17:53 (IST): Delhi looking desperately for an equaliser with 24 minutes left to play.

17:47 (IST): Great play from Delhi. Francis receives a beautiful through ball on the right flank. He enjoys the space and puts in a beautiful ball in the box. Hans Mulder chests it down and whacks it but a deflection sends it sailing into the crowd.

17:41 (IST): GOAL! Jofre scores and Kolkata have the lead vs Delhi. He sends the goalie the wrong and drills it low in the right bottom corner. The first penalty has been converted successfully as Atletico de Kolkata go one up in this clash.

17:36 (IST): The second half gets underway with both looking for an opening goal.

17:07 (IST): Alessandro Del Piero puts in a lovely pass, from the outside half of the shoe, towards Shylo. The young lad makes room and bangs this. He manages to beat the goalie but not the cross bar. That would have been a screamer had it gone inside.

17:02 (IST): Hans Mulder puts in an inswinging cross ahead of the defence line. Denzil gets to the ball quickly. He tries to head the ball behind but the extra bounce makes it go the other way. He quickly gets to the ball to head it towards his fellow defender.

16:56 (IST): Hans Mulder makes a terrible mistake as he plays this ball deep in his half. It goes towards Fikru who uses his body strength to get past the defender. He then tries to get this ball through the goalie's leg but misses as the ball hits the right leg of the no.1 and goes out for a corner. The corner is an ineffective one. First definite chance for the home side.

16:49 (IST): Alessandro Del Piero is fouled on the left flank. He takes the free kick and puts in a lovely ball to find Wim Raymaekers who heads it out.

16:36 (IST): Yellow card for Del Piero gets a yellow card. Not a great start for Delhi.

16:33 (IST): The match gets underway with both teams looking for an early lead.

16:26 (IST): The national anthem gets underway as the fans stand up in respect. Minutes to go before kick-off.

16:20 (IST): So both the teams are set for an epic clash on a Super Sunday in Kolkata. The home side will be looking for their third straight victory in the Indian Super League. 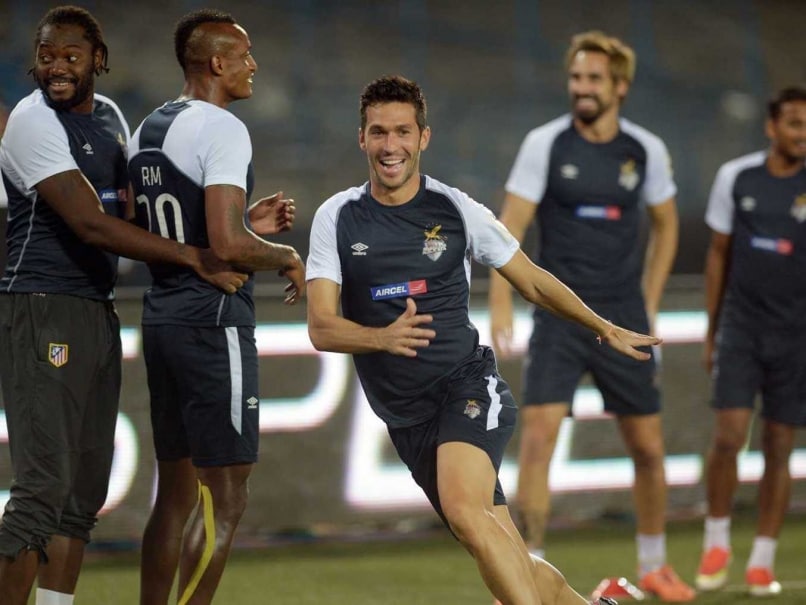 High on confidence after an ideal start to their campaign with back-to-back victories, Atletico de Kolkata will look to keep the momentum going when they take on a star-studded Delhi Dynamos FC in their Indian Super League match here on Sunday. (Full preview)

Luis Garcia's men have played some quality football since the franchise league kicked off at this very turf, Vivekananda Yuva Bharati Krirangan.

While it was Mumbai City FC who were handed a 0-3 rout at home, in their away fixture, ATK outplayed NorthEast United FC 2-0 despite their strong local presence.

The Dynamos, on the other hand, are yet to fire despite the presence of Italian World Cup winner Alessandro Del Piero. They had settled for a goalless draw in their opening game against FC Pune City.

Delhi Dynamos might not have begun their Indian Super League campaign with a bang but their marquee player Alessandro Del Piero said that his side would look to play their best against Atletico de Kolkata on Sunday. 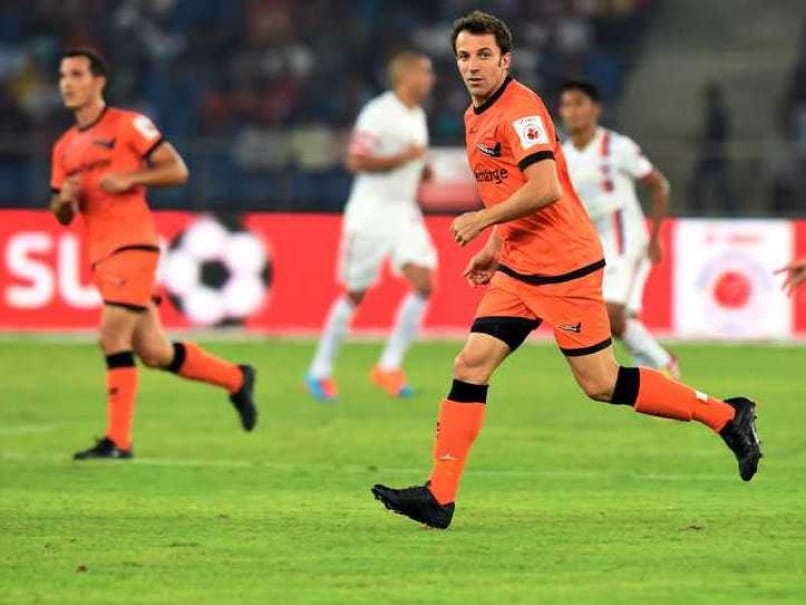 Del Piero (R) in action during the ISL game vs Pune.

"I know it will be tough on Sunday, they (Atletico) are on a roll after winning back to back matches. But we are not here to participate, we are here to fight and show our best," the star Italian World Cup winner told reporters ahead of their ISL fixture here. (Read more)