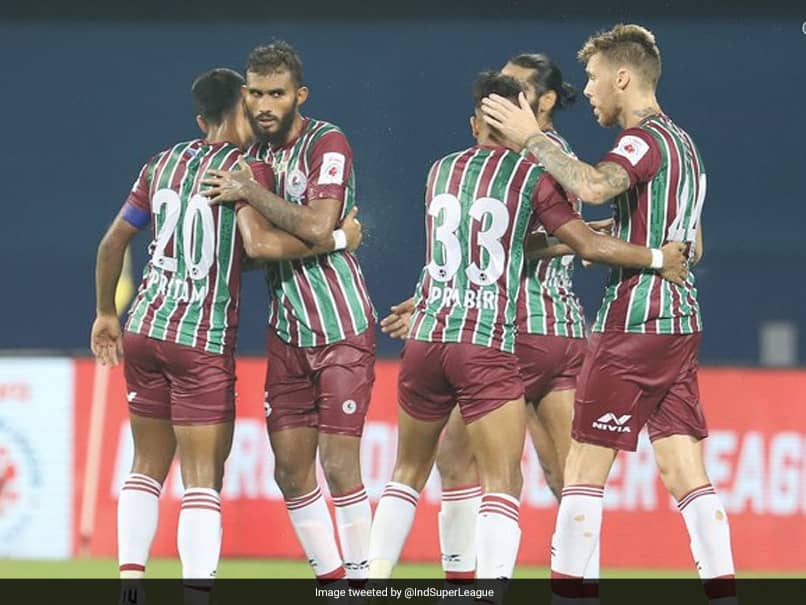 Roy Krishna struck in the 67th minute for ATK Mohun Bagan as they beat Kerala Blasters in ISL opener.© ISL/Twitter

In their new avatar, ATK Mohun Bagan kicked off the seventh season of the Indian Super League on a high, defeating Kerala Blasters by a solitary goal on Friday. Fijian hitman Roy Krishna, who was ATK's top goal scorer with 15 goals last season, struck the all important goal after a 67 minute deadlock to give the all important three points for the green-and-maroon brigade. The Yellow Brigade playing with a heavy defensive lineup of 4-2-3-1 managed to thwart ATKMB throughout the first half but after the hour mark they left a loose ball as the Fijian International pounced on it with a calm and composed finish.

All eyes were on the 131-year-old legacy club Mohun Bagan as they were making their ISL debut following their 'marriage' with three-time defending champions ATK.

The match had an interesting sub-plot as Kibu Vicuna, who had guided Mohun Bagan to their fifth I-League title last season, sat in the opposite dugout in KBFC jersey, while the most successful ISL coach Antonio Lopez Habas was at the helm of ATKMB.

Habas named a predictable 3-5-2 lineup with their star signing Sandesh Jhingan helming the defence in his first outing after a lengthy injury layoff of more than 12 months.

ATKMB had a dominant first half and made some early inroads with Roy Krishna missing an early chance, even as KBFC enjoyed more ball possession in the first 45 minutes.

KBFC, who were the designated home team, looked more threatening and came out with an attacking intent in the second-half.

But KBFC were made to pay for it as Roy Krishna made amends for his three misses in the first half with his poacher goal to become the difference between the two sides.

That goal was enough for ATKMB to sink Kerala Blasters' hearts.

Atletico de Kolkata Indian Super League Football
Get the latest updates on India vs Australia Series, check out the India vs Australia Schedule for 2020-21 and Ind vs Aus live score . Like us on Facebook or follow us on Twitter for more sports updates. You can also download the NDTV Cricket app for Android or iOS.