EPL: Hull's Michael Dawson Out for a Month

Michael Dawson, who recently spent a month on the sidelines with an ankle problem, sustained the injury in the first 10 minutes of Hull's 2-0 defeat at Chelsea. 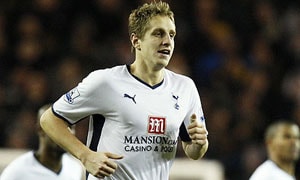 The effects of competing both at home and in Europe last season were highlighted as one of the reasons why Spurs failed to beat north London rivals Arsenal in the battle for a top-four spot. But after being joined by a number of new faces in the dressing room, Dawson believes the club have the resources to cope with fighting on two fronts.

Despite the difficult circumstances, Spurs skipper Michael Dawson is determined to concentrate on making a solid start to the season and securing his club's first opening-day victory in four years.

Tottenham defender Michael Dawson admits he can't wait for his first Premier League appearance since August as the north London club bid to gate-crash the title race with a win against Everton on Wednesday.

Tottenham Hotspur captain Michael Dawson has hit out at reports he is in dispute with the London club over a new contract.

Tottenham's final performance before their Champions League tie against AC Milan was unconvincing, but they improved their chances of playing in Europe's elite competition next season with a 2-1 win at Sunderland on Saturday.

DC vs KXIP, IPL 2020: When And Where To Watch Live Telecast, Live Streaming

MS Dhoni Is "Genius": Sam Curran On CSK Skipper's Decision To Promote Him In Batting Order