Taking a solo trip in her four-wheeler to watch the FIFA World Cup in Qatar was just a spontaneous decision for Kerala woman Naaji Noushi, a homemaker from nearby Mahe. 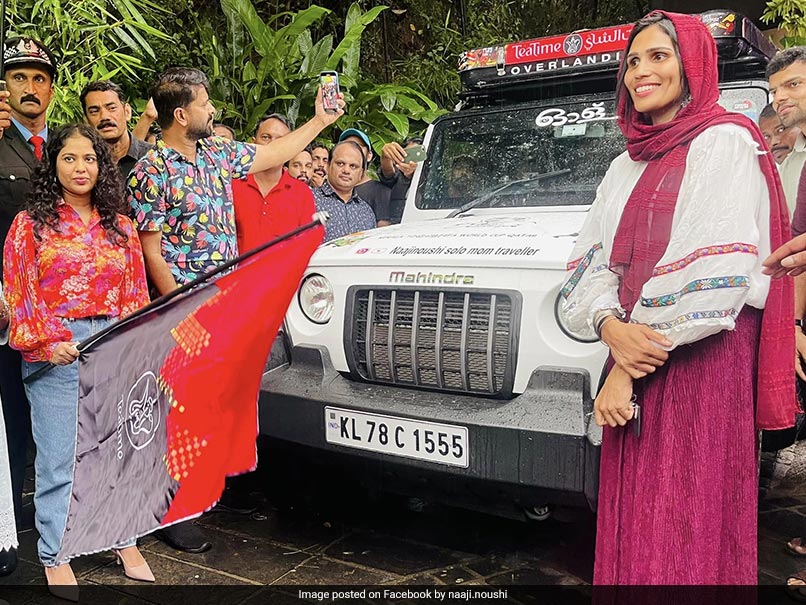 Football and travel are two things this mother of five is crazy about. So, taking a solo trip in her four-wheeler to watch the FIFA World Cup in Qatar was just a spontaneous decision for Kerala woman Naaji Noushi, a homemaker from nearby Mahe. As the World Cup fever is slowly gripping people and football fans, Noushi, an avid traveller, YouTuber and vlogger, commenced her journey to Qatar by driving a Mahindra Thar from here the other day. When Transport Minister Antony Raju flagged off the trip in the presence of village panchayat authorities, it was a dream come true for this soccer crazy woman who has always loved to take adventurous trips.

After reaching Mumbai via Coimbatore, she and her Thar, which is fondly named "olu" (means woman in local parlance), would land in Oman by ship.

From there, she would travel via road and would cover Arab countries including UAE, Bahrain, Kuwait and Saudi Arabia before reaching Qatar, which plays host to the FIFA World Cup this time.

Noushi said it may be for the first time that a woman from Kerala was undertakin an overlanding trip to the GCC nations and that too to watch the football world cup.

"My plan is to enter Qatar by December 10 and watch the finale. I am so excited about this trip. I am a hardcore Argentina fan and Lionel Messi...really want to see my favourite team lifting the cup," she said.

She will continue her stay in Qatar till December 31.

Noushi said the trip was expected to be a complete van-life experience as all essential cooking articles were stocked in the vehicle. It is also planned to park the vehicle near toll plazas and petrol pumps and stay within it during nights.

She said she has an Oman driving licence, which has already been converted into an international one.

"I am a person who has been dreaming to see an Indian team playing the FIFA World Cup. Through this innovative trip, I am trying to be a part of the gala by reaching there in an Indian-made vehicle," she said.

Noushi, who has completed her Plus-Two, married Noushad, an NRK, at a young age and became a mother at the age of 19.

Describing the family as the pillar of support, she said her husband and children were her actual cheerleaders and were encouraging her to travel more.

She already completed four travel series including an all-India trip to Ladakh and shared the photos and videos through her social media pages.

Noushi said her youngest child is just two years old but her mother is taking care of her children when she is away for travel.

"If a woman like me- a homemaker, a wife and a mother of five- can realise my dreams, any ordinary woman in Kerala can chase her dreams confidently," she added.

She also wished that her trip would become an inspiration for more women to come forward to realise their dreams.

Comments
Topics mentioned in this article
Football FIFA World Cup 2022
Get the latest updates on IPL Auction 2023 and check out  IPL 2023 and Live Cricket Score. Like us on Facebook or follow us on Twitter for more sports updates. You can also download the NDTV Cricket app for Android or iOS.