Tottenham signed Togo striker Emmanuel Adebayor on loan from Manchester City for the rest of the season on Thursday. 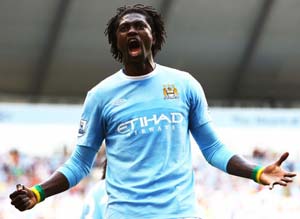 Tottenham signed Togo striker Emmanuel Adebayor on loan from Manchester City for the rest of the season on Thursday.

Adebayor has been a target for Spurs boss Harry Redknapp for several months and he has finally been able to complete a deal for the former Arsenal star.

"We are delighted to announce the signing of Emmanuel Adebayor on a season-long loan from Manchester City," a statement on Tottenham's website read.

Adebayor spent the second half of last season on loan at Real Madrid after falling out of favour with City boss Roberto Mancini.

He was left out of City's pre-season tour to America ahead of the current campaign and reportedly refused to train for several days in protest at his treatment.

The 27-year-old scored twice as Real defeated Spurs 4-0 in the Champions League quarter-final first leg in Spain last season, but he was also subjected to some offensive chants from Tottenham fans during the tie.

His links with Arsenal may also make it hard for him to win over Tottenham's supporters if he doesn't make a flying start to his spell at White Hart Lane.

Adebayor spent three years at Arsenal before joining City for £20 million in 2009.

However, speaking earlier this week, Redknapp made it clear he would have no qualms about signing Adebayor and he expects the striker to silence any critics.

"Arsenal fans hate him so Tottenham fans will love him," Redknapp said. "He's got an advantage by upsetting them. He'll be a hero.

"If he comes and his head's on, he can be fantastic. It's a loan deal anyway, so you can't go wrong.

"He was fantastic against us for Real Madrid, we couldn't handle him. If he's at it and really wants to play then he could be sensational."