Sunderland's defeat left them level on 37 points with Villa and Newcastle United, five points above the relegation zone with three matches to play this season. 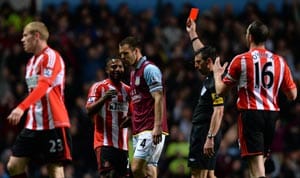 Sunderland attacking midfielder Stephane Sessegnon will miss the rest of the season after his appeal against a three-match ban for his dismissal against Aston Villa on Monday was rejected, the Football Association announced on Wednesday.

The 28-year-old Benin international was shown a straight red card after catching Villa midfielder Yacouba Sylla with a late challenge during the second half of the Premier League game at Villa Park, which Sunderland lost 6-1.

"There was nothing in it," Di Canio said. "The leg was not straight. He didn't want to cause any damage to his opponent. The referee fell in a trap. It wasn't a nasty action."

Sunderland's defeat left them level on 37 points with Villa and Newcastle United, five points above the relegation zone with three matches to play this season.

Comments
Topics mentioned in this article
Football Sunderland Manchester City Alex Ferguson Mark Hughes Stephane Sessegnon English Premier League
Get the latest updates on India vs Australia and check out  Schedule, Results and Live Score. Like us on Facebook or follow us on Twitter for more sports updates. You can also download the NDTV Cricket app for Android or iOS.