Sunderland are now at 15th place, ahead of both Norwich and Newcastle on goal difference. They are three points ahead of 18th-place Wigan but with a game more played. 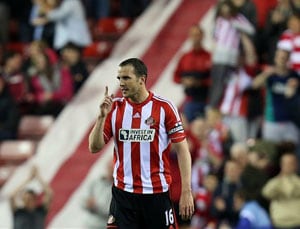 John O'Shea's second-half equalizer gave 10-man Sunderland a 1-1 draw against Stoke on Monday and a valuable point in the team's fight against relegation from the Premier League.

Stoke seemed to be headed for a win after Jonathan Walters scored for the visitors in the ninth minute Sunderland's Craig Gardner was sent off in the 34th for a dangerous challenge on Charlie Adam.

But O'Shea was able to prod home Sebastian Larsson's corner in the 63rd to leave Paolo di Canio's team in 15th place, ahead of both Norwich and Newcastle on goal difference. It is three points ahead of 18th-place Wigan but with a game more played.

"I'm very pleased because this point in my opinion will prove crucial at the end of the season," Di Canio said. "In the second half, the last 15 minutes of the first half, I saw the team I want to see, playing football with enthusiasm and character."

Danny Rose almost stole victory for the hosts 10 minutes from time but his low shot hit the outside of the near post.

Walters slammed home the opening goal via the underside of the crossbar from close range after his initial header from a corner was blocked by Danny Graham on the line.

Sunderland's task then became even harder when Gardner went in studs first against Adam as he raced down the right flank, and referee Lee Mason showed a straight red card.

But Sunderland continued to show initiative and was rewarded when Stoke failed to clear Larsson's corner and the ball dropped to O'Shea at the far post, and the defender was able to stick his leg out to sidefoot it into the net.