Steven Gerrard says best yet to come in landmark season

During the past couple of seasons Gerrard has found himself operating in a deeper role, with the likes of Jonjo Shelvey and Jordan Henderson taking up more attacking positions. 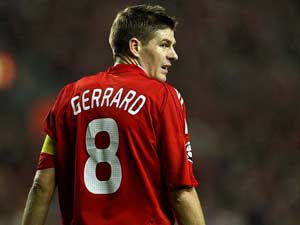 Liverpool captain Steven Gerrard believes he has yet to find his best form in a season already littered with statistical highlights for the star midfielder.

Gerrard has been on the field for every minute of Liverpool's 21 Premier League games so far his season, scoring four goals.

Three of those goals have come in the 32-year-old England captain's last five league appearances, a sign that he thinks his performances are coming up to scratch.

"I've had mixed experiences this season," Gerrard told Liverpool FC magazine. "I've passed some unbelievable landmarks for club and country, getting to the 600-games mark and winning my 100th cap for England.

"But with the slow start we made and being where we have in the league it's been a bit mixed for me.

"There's my form as well. I've played well in some games but I've been disappointed with myself in others and I'm not happy with my goal tally at the moment.

"People's opinions, perceptions and the way they judge you changes when you get a goal.

"I think my performances are getting closer to where I want them to be so if I can add goals to those performances then maybe people will start saying the old Steven Gerrard is back."

During the past couple of seasons Gerrard has found himself operating in a deeper role, with the likes of Jonjo Shelvey and Jordan Henderson taking up more attacking positions.

But he insisted he had no problems with manager Brendan Rodgers' tactics.

"I don't think the manager's asked me to do anything different in terms of the way he wants to me to perform," Gerrard said.

"But because of certain injuries, situations that have happened to the team and formations that we've played, I've naturally played a little bit deeper.

"I've maybe gone into protection mode rather than playing the old Steven Gerrard way with the shackles off and going for the jugular.

"When you're one of the experienced players in the team, the team's more important than yourself and maybe I've sacrificed myself in certain games and tried to protect by playing deeper and be a controller with Joe (Allen).

"But now that Lucas (Leiva) is back he gives me the licence to get forward a lot more so hopefully I can add some goals to my performances.

"I've got the buzz that the team's improving and it's going to get better.

"I'm confident that come the end of the season I will be satisfied with myself and the team because I do believe we can finish the season really strong."

Comments
Topics mentioned in this article
Football Manchester City Liverpool Alex Ferguson Jonjo Shelvey Jordan Henderson Mark Hughes Steven Gerrard English Premier League
Get the latest updates on ICC Women's Cricket World Cup 2022 and IPL 2022, check out the Schedule , Live Score and IPL Points Table. Like us on Facebook or follow us on Twitter for more sports updates. You can also download the NDTV Cricket app for Android or iOS.