Spurs went into the game aiming to tighten their grip on third place and they took the lead after just 34 seconds when a stretching Emmanuel Adebayor toed Jan Vertonghen's cross past Tim Howard. 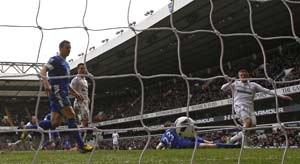 Spurs went into the game aiming to tighten their grip on third place and they took the lead after just 34 seconds when a stretching Emmanuel Adebayor toed Jan Vertonghen's cross past Tim Howard.

However, Phil Jagielka equalised in the 15th minute, rising to nod Leighton Baines' corner between the legs of Spurs goalkeeper Hugo Lloris.

Kevin Mirallas then put the visitors in front eight minutes into the second half with a goal to rival his strike in last weekend's 1-0 win at Stoke City.

The Belgian picked up the ball in the inside-right channel and weaved past three opposing players before planting a shot in the bottom-left corner.

David Moyes' side were within sight of a fourth straight league win, only for Sigurdsson to tap home an equaliser in the 87th minute after Adebayor's shot came back off the post.

The point left Everton four points behind Arsenal, who occupy the fourth and final Champions League qualifying place, with Spurs now two points above their north London rivals in third.

Liverpool's bid for a European berth faltered as they were held to a frustrating 0-0 draw at home to West Ham United.

Liverpool bossed the first half at Anfield but lost Stewart Downing to injury in the 25th minute and saw Mohamed Diame flash a shot over the hosts' crossbar after a dazzling dribble from wide on the right.

The home side continued to force the issue after the interval but could not find a breakthrough, with Steven Gerrard having a shot blocked on the line by James Tomkins and Luis Suarez grazing the post.

West Ham might even have snatched victory at the death, but Jack Collison's header was kneed off the line by Lucas Leiva.

Later on Sunday, Paolo Di Canio will sample Premier League management for the first time when his new club Sunderland visit Chelsea, having seen his first week in the job dominated by speculation about his political beliefs.

Di Canio, who released a statement earlier this week declaring that he is not a fascist, is bidding to reverse a slump that has seen Sunderland slip to within a point of the relegation zone.

Chelsea, meanwhile, can reclaim fourth place from Arsenal with victory.

At the foot of the table, second-bottom Queens Park Rangers host third-bottom Wigan Athletic in a game that could prove pivotal to both sides' chances of escaping the drop.