Tottenham are just a point behind early pace setters Leicester, but only three points separate the top six, with Chelsea and Aston Villa also having the chance to claim top spot for a few hours at least. 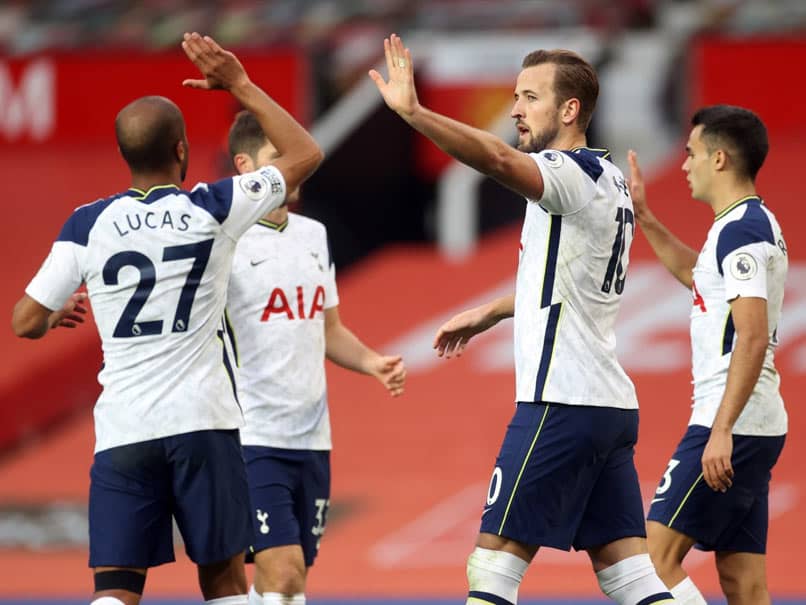 Tottenham's title credentials face a thorough examination when they host Manchester City as the Premier League returns on Saturday after the international break. Spurs are just a point behind early pace setters Leicester, but only three points separate the top six, with Chelsea and Aston Villa also having the chance to claim top spot for a few hours at least when they face Newcastle and Brighton respectively. With the final international fixtures of the year done and dusted, a gruelling winter schedule of club football awaits for England's top-flight with nine rounds of league matches before January 2.

Defending champions Liverpool are already bearing the brunt of the hectic schedule as Jurgen Klopp's squad has been ravaged by injury ahead of Leicester's trip to Anfield.

Tottenham enjoyed a couple of hours at the top of the table for the first time in over three years prior to Leicester's victory over Wolves before the international break.

Jose Mourinho's men are unbeaten in seven league games, with the form of Harry Kane and Son Heung-min raising hope they could win the league for the first time in 60 years.

However, those title aspirations will be put to the test with City, Chelsea, Arsenal, Liverpool and Leicester to come in their next six games.

City are languishing down in 10th, six points off the top but with a game in hand. A return of just 12 points from their opening seven games of the season is by far their lowest since Pep Guardiola arrived in Manchester five years ago.

Yet, after a difficult start caused by the lack of a pre-season, injuries, Covid cases and a difficult run of fixtures, the trip to Tottenham will also be an indicator as to whether City have turned the corner.

Guardiola's men are unbeaten in nine games in all competitions, but have unusually struggled for goals, scoring just once in each of their last five league games.

The lack of a natural striker for much of the campaign due to injuries to Gabriel Jesus and Sergio Aguero has been a significant handicap.

But Guardiola, who penned a two-year contract extension on Thursday, could have both Jesus and Aguero to choose from for the first time this season at the weekend, while Ferran Torres is full of confidence after scoring a hat-trick against Germany in Spain's 6-0 win on Tuesday.

Already rocked by the long-term injury to Virgil van Dijk, Liverpool's defensive resources were further depleted over the international break with Joe Gomez ruled out for the remainder of the season.

Trent Alexander-Arnold is out for a further two weeks, while Jordan Henderson is an injury doubt after picking up a muscle strain on international duty.

Top scorer Mohamed Salah will also be missing for Leicester's visit after testing positive for coronavirus while in Egypt.

Despite the disruption, the Reds could go back top of the table with victory on Sunday should Spurs not beat City.

But there is a huge opportunity for former Liverpool boss Brendan Rodgers to become the first man to lead a visiting side to a league win at Anfield since April 2017 with no such injury concerns for the high-flying Foxes.

Jamie Vardy's retirement from England duty means the Premier League's joint top goalscorer has had two weeks off, while Rodgers could have full-backs Ricardo Pereira and Timothy Castagne back from injury.

United's victory at Everton ensured the  two-week break was not filled with more speculation over manager Ole Gunnar Solskjaer's future.

But in a topsy-turvy season for United, there are no guarantees Solskjaer's team will build on that win even when West Brom visit Old Trafford looking for their first win of the season.

United have not won at home in the Premier League for six matches and have already lost as many games at Old Trafford as they did in all of last season.

West Brom should be the perfect visitors with Slaven Bilic's men taking just three points from their opening eight games.

But the Baggies have won three and drawn one of their last five visits to Old Trafford.

Leicester City English Premier League Football
Get the latest updates on IPL 2021, IPL Points Table , IPL Schedule 2021 , live score . Like us on Facebook or follow us on Twitter for more sports updates. You can also download the NDTV Cricket app for Android or iOS.