Premier League: Phil Foden came on at half-time and produced an instant equaliser, but Manchester City couldn't deliver the knockout blow and have now won just one of their last four league games. 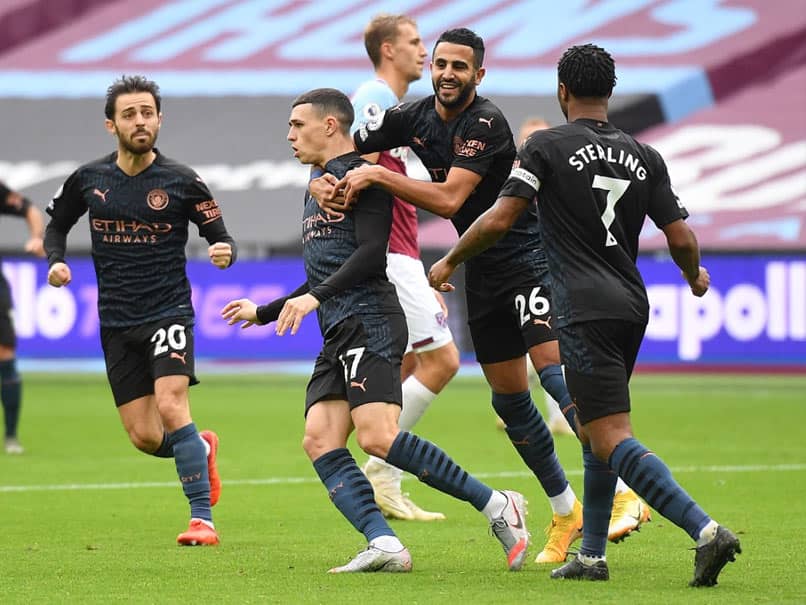 Phil Foden came off the bench to rescue a 1-1 draw against West Ham United.© AFP

Pep Guardiola admitted he cannot guarantee Manchester City will emerge from their slump after Phil Foden came off the bench to rescue a 1-1 draw against West Ham on Saturday. Guardiola's side fell behind to Michail Antonio's superb overhead kick in the first half at the London Stadium. Foden came on at half-time and produced an instant equaliser, but City couldn't deliver the knockout blow and have now won just one of their last four Premier League games.

While Arsenal and Porto were beaten in their previous two matches, City still don't seem to have completely recovered from their 5-2 thrashing by Leicester in September.

They are already five points behind leaders Everton, who play Southampton on Sunday, and look more vulnerable than at any time since Guardiola's first season in charge.

"I'm not a guy who can predict the future. We've already dropped seven points, which is a lot," Guardiola said.

"We suffered in the last 10 or 15 minutes of the first half. In the second half we were better and scored early.

"We had the chances we needed to win the game, but unfortunately we couldn't score again.

"We've struggled a lot for many reasons. We have to take things game by game and see what happens."

Adding to Guardiola's problems, Sergio Aguero suffered a "muscular injury" according to the City boss, who did not know how long his star striker would be sidelined for.

Aguero hasn't scored in the top flight since January and is notoriously slow to return to his best after injuries.

Just back after several months out following knee surgery, the Argentine was replaced by Foden at the interval.

Tricky trips to Marseille and Sheffield United next week will provide a further test of just how determined City are to recover the all-conquering form that swept them to the title in 2018 and 2019.

After fighting back from 3-0 down at Tottenham with three goals in the last 10 minutes in their previous match, this was another encouraging result for West Ham.

Raheem Sterling scored a hat-trick in City's 5-0 win at West Ham last season and his penetrating run laid on an early chance for Aguero, whose shot was deflected wide.

Guardiola named an unchanged line-up in consecutive games for the first time since October 2017, but City still lacked rhythm and they fell behind to Antonio's moment of magic in the 18th minute.

Vladimir Coufal swung a cross into the City area and Antonio showed his strength and agility as he held off Ruben Dias before smashing a superb overhead kick past Ederson for his third goal of the season.

City appealed for a handball by Tomas Soucek in the build-up, but VAR allowed the goal to stand.

Since the Premier League restart in June, only Tottenham striker Harry Kane has scored more goals than Antonio's 11.

City had lost their last six Premier League away games when they conceded the first goal.

But Foden made an immediate impact as the 20-year-old grabbed his third goal of the season in the 51st minute.

Joao Cancelo made an incisive burst down the left and aimed his cross into the West Ham area, where Foden controlled and turned in one motion before driving his low shot past Lukasz Fabianski.

With 22 minutes left, Guardiola introduced Kevin De Bruyne, who missed the wins over Arsenal and Porto with a muscle problem.

De Bruyne's pinpoint pass gave Sterling a golden opportunity to win it for City in the 86th minute, but the forward's poor touch and hesitant shot allowed Fabianski to save.

Guardiola shook his head and there was more frustration in stoppage-time when Riyad Mahrez's shot was pushed onto the post by Fabianski.

West Ham United Pep Guardiola English Premier League Football
Get the latest updates on IPL 2021, IPL Points Table , IPL Schedule 2021 , live score . Like us on Facebook or follow us on Twitter for more sports updates. You can also download the NDTV Cricket app for Android or iOS.