Paul Pogba, back after over two months out with a hamstring injury, carved out a superb 37th-minute equaliser for Manchester United. 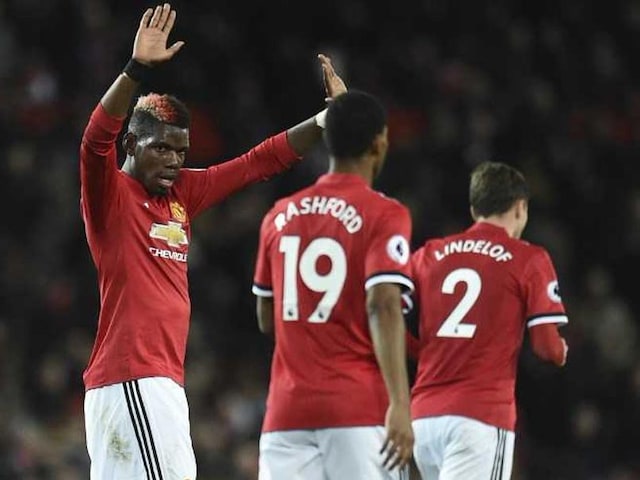 Paul Pogba made an instant impact for Manchester United after returning from injury.© AFP

Paul Pogba crowned his return from injury by scoring and laying on an equaliser for Anthony Martial as Manchester United hit back to beat Newcastle United 4-1 on Saturday. Chris Smalling was also on the mark in the first half, while Romelu Lukaku ended a drought of seven games without a goal. To cap a perfect afternoon for the home team, who restored the eight-point gap separating them from Premier League leaders Manchester City, Zlatan Ibrahimovic also enjoyed a 13-minute run-out as a substitute.

Jose Mourinho's men had to respond to a storming opening from the visitors, scoring twice in the closing minutes of the first half to cancel out Dwight Gayle's 14th-minute opener.

Pogba, back after over two months out with a hamstring injury, carved out a superb 37th-minute equaliser, taking a short pass from Antonio Valencia and beating Isaac Hayden with a neat sidestep.

The France international then delivered a perfect cross for fellow Frenchman Martial, who rose above DeAndre Yedlin to head an unstoppable effort past the stranded Rob Elliot.

The goalkeeper would be beaten by another header, deep in first-half injury time, as the visitors, rather unjustly, found themselves heading into the break a goal down.

After a left-wing corner had broken down, Ashley Young was allowed space 30 yards from goal to beat a defender and send over another excellent cross.

Smalling outjumped Florian Lejeune to power a header past Elliot at the back post.

And the first-half drama was still not over.

Another Newcastle counter-attack ended with David de Gea saving superbly from Hayden and after the rebound broke to Matt Ritchie, his shot was deflected just wide off Gayle's knee.

A second goal for Gayle would not have been unjust after the first-half display from Rafael Benitez's side, who took the lead with a devastating counter-attack.

Gayle and Joselu had a hand in the right-wing move that ended with Yedlin crossing, United defender Victor Lindelof losing his footing and Gayle scoring clinically off the left-hand post.

It was the start of an impressive period for the visitors, who refused to be knocked out of their stride by a United side buoyed by the return of Pogba.

Soon after the goal, young winger Jacob Murphy broke upfield before cutting in and shooting tamely at De Gea.

Then Jonjo Shelvey's beautifully weighted through ball played Murphy through on goal, only for him to roll a shot narrowly wide of the far post.

They were misses that looked like they may prove costly as United grew into the game, even though the hosts hardly troubled Newcastle prior to the equaliser.

Thereafter, it looked like being a tough afternoon for Newcastle, with Martial threatening twice in the opening exchanges of the second half.

The first of those chances saw the Frenchman miskick completely from six yards, following a clever piece of play from Lukaku, although the miss would not prove too costly.

In the 54th minute, the three points appeared secure as Pogba marked a memorable comeback with a goal of his own.

Juan Mata's pass sent Lukaku sprinting into the area from the right flank and his far-post cross was headed down, selflessly and intelligently, by Rashford to present Pogba with the simplest of close-range finishes.

Newcastle still had something to offer, with Murphy's magnificent 25-yard shot being tipped over expertly by De Gea.

But after 70 minutes, Lukaku played a neat one-two with Mata, Ciaran Clark failed to intercept and the Belgian was able to take his time before launching a shot into the roof of the net.