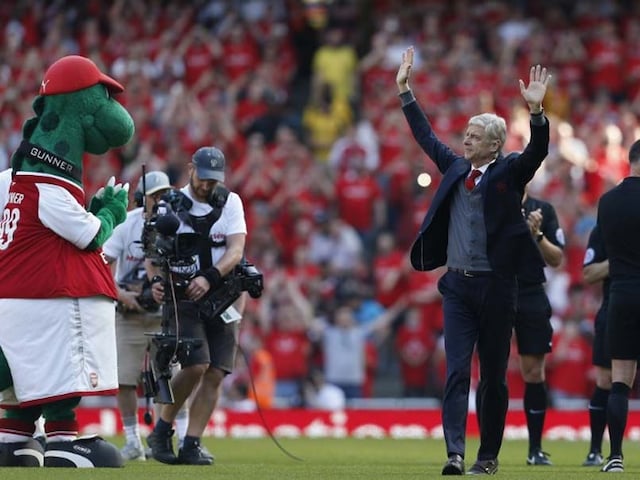 Arsene Wenger salutes the crowd before the start of the match between Arsenal and Burnley.© AFP

After 22 years as Arsenal manager, Arsene Wenger took charge of his final game at the Emirates stadium on Sunday as Burnley visited North London for a day tinged with nostalgia for the Frenchman and the home support. Arsenal players and fans sported red t-shirts emblazoned with "Merci Arsene" (Thank you Arsene), whilst both teams formed a guard of honour for Wenger before kick-off. Chants of "there is only one Arsene Wenger" rang around the 60,000 capacity stadium, which was far fuller than home league games in recent months as fans stayed away in protest at a poor season on the field.

"I expect today will be dominated by sadness," wrote Wenger in his final programme notes.

"It's the end of a long story for me at Arsenal. But I will also feel grateful for having led this club - that I cherish so much - for such a long time."

Wenger won three Premier Leagues and a record seven FA Cups. His crowning glory coming in the 2003/04 season when Arsenal won the league without losing a single game.

"The Arsene Wenger era is one that Arsenal fans will never forget," said a special 60-page supplementary programme given to supporters.

"Legendary games and players, including an 'Invincible' achievement that allows supporters to argue they've seen the greatest team English football has ever produced."

Before the game fans were encouraged to sign tribute book, which will be given to Wenger at the end of the season.

"Overwhelmingly, the emotion is sadness, because it has been 20 years coming here, seeing him," Arsenal fan James Sherwan told AFP outside the Emirates. "I'm thirty. Since I was 10 he's been a manager, and it's a lot of good memories."

However, 'The Invincibles' was the last time Arsenal won the league with supporters increasingly frustrated at the Gunners' inability to compete for Premier League and Champions League honours.

A 1-0 defeat to Atletico Madrid on Thursday in the Europa League semi-finals means that for the second consecutive season, Arsenal will not even qualify for the Champions League.

"We were a bit short on finishing our chances, and also on our defensive focus," said Wenger in his programme notes on defeat in the Spanish capital. "That's the story we have seen so many times before this season."

Comments
Topics mentioned in this article
Arsenal Arsene Wenger English Premier League Football
Get the latest Cricket news, check out the India cricket schedule, Cricket live score . Like us on Facebook or follow us on Twitter for more sports updates. You can also download the NDTV Cricket app for Android or iOS.