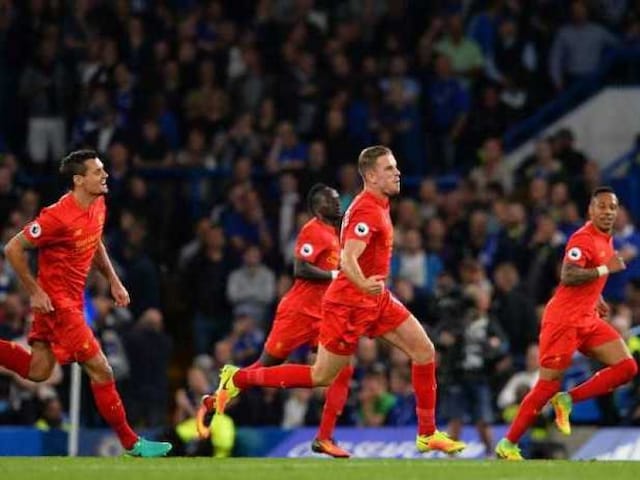 In a dominant first-half display, Liverpool took the lead through Dejan Lovren before England midfielder Henderson curled home a superb effort from distance in the 36th minute.

Diego Costa reduced the arrears in the second half with his fifth goal of the campaign, but Jurgen Klopp's men held out to register another eye-catching Premier League win.

"We played football like hell," Klopp told Sky Sports. "It was really nice to watch. In the second half it was a bit more difficult. After their goal, we managed it well."

Liverpool have also beaten Arsenal and champions Leicester City this season, the only blot on their league record being a surprise 2-0 defeat at promoted Burnley.

They moved level on points with Chelsea and Merseyside rivals Everton in the early-season standings, two points below leaders Manchester City.

It had been with a 3-1 victory on this ground that Klopp recorded his first win as Liverpool manager 11 months ago. On Friday's evidence, his team are title contenders.

Chelsea would have gone top with victory, but instead Conte tasted defeat for the first time in his fledgling tenure as his side dropped points again following last weekend's 2-2 draw at Swansea City.

"We must feel the danger and today, we didn't," said Conte.

"We have to reflect a lot on this game because it is important to understand the situation if we don't want to repeat another bad season like last season."

An all-round brilliant display. @JHenderson, you are our @carlsberg Man of the Match! ?? pic.twitter.com/5LPAy9MAcn

It was Conte's first home league defeat since a 2-1 loss to Sampdoria with Juventus in January 2013.

David Luiz, meanwhile, lost to Liverpool on his second Chelsea debut, following his return to the club from Paris Saint-Germain -- just as he had in his first appearance in February 2011.

Liverpool were without Roberto Firmino due to what the club said was a "minor groin strain", but any fears they might miss the hard-working Brazilian forward were banished immediately.

The away side registered two shots on target inside the first two minutes, Thibaut Courtois saving from Georginio Wijnaldum and Daniel Sturridge, and they took the lead in the 17th minute.

Chelsea were punished for twice switching off at a free-kick on the Liverpool left.

First they allowed Philippe Coutinho to take the set-piece quickly, giving the Brazilian time to measure an in-swinging cross towards the back post.

Slack marking left Sadio Mane and Lovren unmarked and it was the Croatian -- back in the team after an eye injury -- who seized the chance, beating Courtois with an adroit side-foot volley.

After Sturridge had thrashed a cross-shot across goal, Chelsea created their first real chance when Luiz's looping header from Willian's free-kick was fielded by Liverpool goalkeeper Simon Mignolet.

But within two minutes the hosts were 2-0 down as Henderson gathered a hurried clearance from Gary Cahill, steadied himself and arced a sublime 25-yard shot right into Courtois's top-left corner.

"It was nice, really nice," was Klopp's verdict on the goal. "He's such a hard worker. It was well deserved."

Chelsea's players were being bypassed by the match, but they managed to plug some of the holes in their defence in the second half and in the 61st minute, Costa gave them a lifeline.

Joel Matip's unnecessary decision to go to ground enabled Nemanja Matic to reach the byline on the left and the Chelsea midfielder cut the ball back for Costa to volley home at the near post.

The Brazil-born Spain international scored a late equaliser at Swansea and he threatened to do the same here, brilliantly gathering Oscar's headed knock-down and lashing a shot at Mignolet.

But despite Conte sending on Cesc Fabregas, Victor Moses and Pedro, it was Liverpool who came closest to scoring again, substitute Divock Origi's header drawing a fine goal-line stop from Courtois.

Comments
Topics mentioned in this article
Chelsea Liverpool Jordan Henderson English Premier League Football
Get the latest Cricket news, check out the India cricket schedule, Cricket live score . Like us on Facebook or follow us on Twitter for more sports updates. You can also download the NDTV Cricket app for Android or iOS.