Arsenal, beaten at Crystal Palace for the first time since 1979, were shambolic and their underachieving stars were barracked with chants of "you're not fit to wear the shirt" in the closing stages of their heaviest league defeat this season. 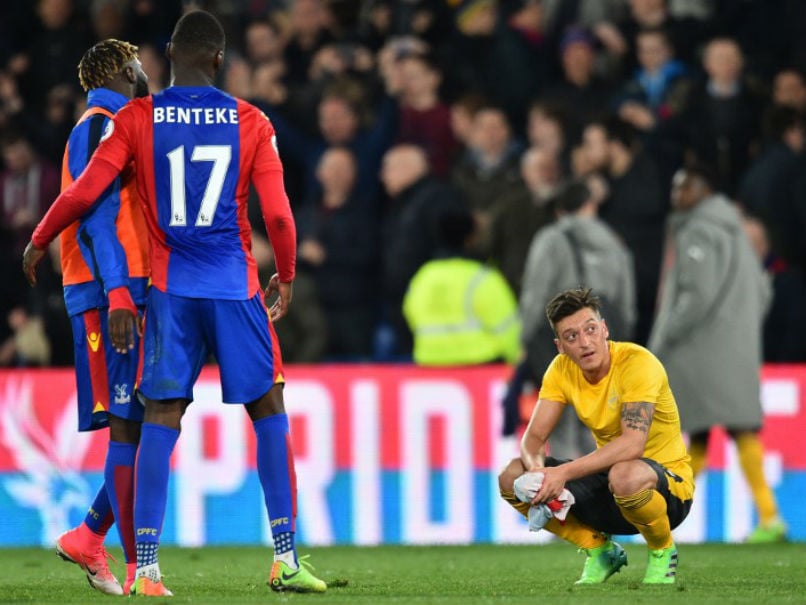 Arsene Wenger's wretched season hit a new low as Arsenal crashed to a humiliating 0-3 defeat at lowly Crystal Palace that leaves their Premier League top four bid in tatters. Wenger has been under siege in recent weeks as angry Arsenal fans demanded his resignation and the calls for the Gunners boss to quit will grow even louder after one of the most chastening defeats of his 21-year reign. Needing a victory to keep pace with their rivals in the race for Champions League qualification, spineless Arsenal showed none of the required poise and passion as they crumbled on a woebegone Monday night in south London.

Andros Townsend put Palace ahead in the first half and Yohan Cabaye doubled the hosts' lead after the break.

Arsenal, beaten at Palace for the first time since 1979, were shambolic and their underachieving stars were barracked with chants of "you're not fit to wear the shirt" in the closing stages of their heaviest league defeat this season.

Wenger's retort to critics who claim he's past his best is to point at his record of leading Arsenal into the Champions League for the last 19 seasons.

But that crutch looks increasingly flimsy after a defeat that leaves sixth placed Arsenal languishing seven points behind fourth placed Manchester City, although with one game in hand.

It is increasingly difficult to see how Wenger, who has yet to sign a new contract, can prolong his reign as his team falls apart around him.

Palace, now six points clear of the relegation zone, recently won at leaders Chelsea and it quickly became clear they were capable of another famous scalp.

Harrying Arsenal out of possession, Sam Allardyce's side carved out a good chance when Christian Benteke teed up Milivojevic for a powerful strike that flashed just wide from the edge of the area.

Rattled by that early escape, Arsenal tried to respond as Mohamed Elneny's long-range effort was pushed away by Wayne Hennessey.

But, with Laurent Koscielny again absent due to injury, Wenger's defence were a bag of nerves and it was no surprise when Palace bullied their way into the lead in the 17th minute.

Failing to deal with a routine high ball towards Benteke, Arsenal reacted too slowly as Townsend exchanged passes with Cabaye on the edge of the area.

Cabaye found the unmarked Wilfried Zaha down the right and when he slipped a low cross towards Townsend, the Palace midfielder took advantage of more sloppy marking to lift a cool close-range finish over Emiliano Martinez.

Wearing the anguished expression that has come to define a dismal season, Wenger was a picture of frustration and his mood was hardly improved when Alexis Sanchez shot tamely at Hennessey after advancing into a dangerous position.

It might have been different if Mamadou Sakho had been punished with a penalty after appearing to block a Sanchez shot with his hand.

But Wenger's luck was out and Arsenal's creaky defence was nearly breached again when a counter-attack ended with Benteke barging through for a shot that Martinez pushed away.

Although they controlled possession, Arsenal did little with it, with Sanchez and Mesut Ozil alarmingly lethargic for long periods.

When Hector Bellerin miscued wide at the far post, Wenger had seen enough and sent on Olivier Giroud and Aaron Ramsey after an hour.

It made no difference and seconds after the switch Cabaye plunged Arsenal deeper into the abyss.

Townsend fed Zaha down the right and he whipped over a low cross that Cabaye met with a superb strike over Martinez and into the top corner.

There was worse to come five minutes later.

Martinez conceded a penalty with a foul on Townsend and Milivojevic slotted in the spot-kick to leave Wenger shell-shocked.

Comments
Topics mentioned in this article
Arsenal Crystal Palace Arsene Wenger Football English Premier League
Get the latest updates on India vs England Series, India vs England , live score and IPL 2021 Auction . Like us on Facebook or follow us on Twitter for more sports updates. You can also download the NDTV Cricket app for Android or iOS.