Manchester City thrashed United 4-1 on Sunday. This is United's worst start to a Premier League campaign since the 2004-05 season. 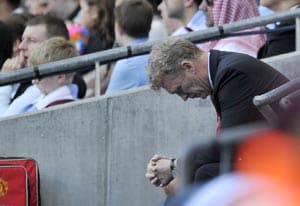 The reality of life after Alex Ferguson is really kicking in at Manchester United, which is languishing in mid-table after a painful 4-1 loss to its local rival.

To chants of "Easy! Easy!" Manchester City ripped United apart at Etihad Stadium to leave the champions staring at a five-point gap to early pacesetters Arsenal and Tottenham in the Premier League on Sunday.

"It's horrible to lose the derby - it's always horrible. It's worse when you lose in this way," said United captain Nemanja Vidic, whose team was four goals down after 50 minutes. (Match in pics)

Arsenal leads on goal difference from Spurs after Germany playmaker Mesut Ozil, making his home debut, set up all his team's goals in a 3-1 win over Stoke, while Tottenham needed a strike in the third minute of stoppage time by Brazil midfielder Paulinho to snatch a 1-0 win at Cardiff.

Both north London clubs have won four of their opening five matches and have overhauled Liverpool, which lost 1-0 to Southampton on Saturday.

"The only thing of our position at the moment is that we are in a position where we can focus on improvement in a stable environment, so that's a good basis," said Arsenal manager Arsene Wenger.

Swansea beat Crystal Palace 2-0 in the other match, with Spanish forward Michu scoring for the third straight match this week.

It is United's worst start to a Premier League campaign since the 2004-05 season. And after a testing first five league matches where the team has picked up just one point from matches against Liverpool, Chelsea and City, it doesn't get any easier for Moyes.

On Wednesday, Liverpool will visit Old Trafford for a League Cup third-round match with Luis Suarez back from a 10-match ban and likely to play a full-strength team with no European football to worry about this season.

"I've made them aware of what I think," Moyes said, when asked if he had given the team the "hairdryer treatment" Ferguson was famous for at halftime intervals.

United was all over the place against City, its defense overpowered by the strength of Alvaro Negredo and the darting runs of Sergio Aguero, who opened the scoring in the 16th minute with an acrobatic volley and scored two minutes after the break to make it 3-0.

Yaya Toure had doubled City's lead in first-half injury time and Samir Nasri lifted an already-euphoric atmosphere inside the Etihad up a notch by volleying home in the 50th minute.

Wayne Rooney's superb, curling free kick in the 87th minute was a consolation for United, which hasn't scored in open play in the league since the opening-day 4-1 victory at Swansea.

Robin van Persie was missing for United because of a groin injury, a telling blow with the Dutchman having linked up so well with Rooney in recent matches.

"The start to the season could be a lot better," Moyes said. "We did say it could be difficult start."

City's offseason spending of around 90 million pounds (now $144 million) is starting to reap its rewards, with the team now two points behind Arsenal and Spurs after its best performance of the season.

"It's an important game for the team," City manager Manuel Pellegrini said. "And for the fans they will be happy for the month now."

At Arsenal, the in-form Aaron Ramsey opened the scoring in the fifth minute after Ozil's free kick was parried by goalkeeper Asmir Begovic before Geoff Cameron equalized for Stoke.

Per Mertesacker restored Arsenal's lead in the 36th minute by darting in to meet Ozil's corner with a header and Bacary Sagna was on the end of another Ozil set piece in the 72nd, heading in from a free kick.

Spurs left it late in south Wales, gaining the win they deserved when Paulinho tapped in Erik Lamela's pass from close range for his first Premier League goal.

"We played so much football it would have been unfair to leave here with only one point," Tottenham manager Andre Villas-Boas said.

Nathan Dyer added to Michu's early strike for Swansea, completing a satisfying week for the Welsh club after beating Valencia 3-0 in the Europa League on Thursday.