Bernardo Silva and Leroy Sane struck for Manchester City in 12 second-half minutes at Old Trafford to inflict a seventh defeat in nine games on United. 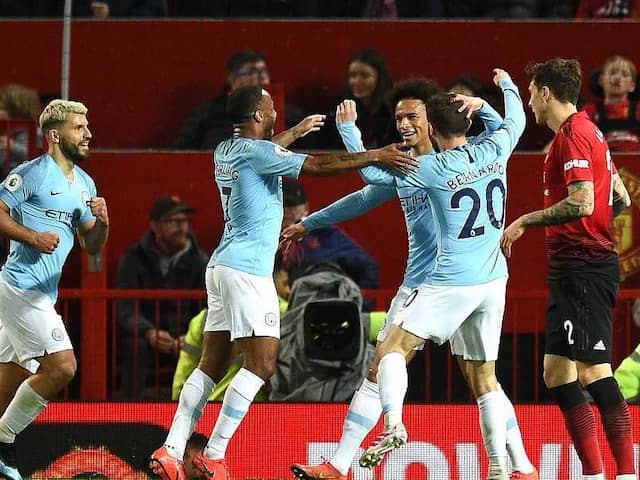 Manchester City manager Pep Guardiola believes his side have raised the bar in the Premier League after edging one point back ahead of Liverpool in a titanic title race with a 2-0 win at Manchester United on Wednesday. Bernardo Silva and Leroy Sane struck for the visitors in 12 second-half minutes at Old Trafford to inflict a seventh defeat in nine games on United, who remain three points adrift of the top four. City cannot match their record 100 points tally in romping to the title last season, but victories over Burnley, Leicester and Brighton will clinch the title on 98 points and ensure Liverpool's 29-year wait to win the league continues despite already posting a club record points tally in the Premier League era.

"We increased the level for the Premier League last season with 100 points. That's the level Liverpool are chasing. What they have done is incredible but it's in our hands," said Guardiola.

"Both teams deserve the title. But it can be just one. The team that is going to lose can't have regrets because they have given everything."

City's trip to Old Trafford was billed as the last big hurdle left for Guardiola's men to clear despite United's terrible run of form.

However, Guardiola warned of the tight turnaround before a very different type of test at Burnley on Sunday.

"Normally with this kind of victory you can it enjoy it the most but we have to be calm," added Guardiola.

"Now we go to Burnley and we know how tough it will be. It's important to be calm. We are still not champions with three games left -- it's incredible with the points we have and Liverpool have.

United boss Ole Gunnar Solskjaer slammed his players' attitude after a 4-0 thrashing at Everton on Sunday and was rewarded with a far more energetic and committed performance, even if City's greater quality eventually shone through.

"They've set the standard in the last couple of seasons. They have been the best team in the country and that's the standard we want to get to," admitted Solskjaer.

Yet, Arsenal's defeat at Wolves means the Red Devils are still very much in the race for Champions League qualification, should they beat fourth-placed Chelsea at home on Sunday.

"I'm concerned about the lack of results," added Solskjaer.

"The strange reality is that we are still in with a shout for the top four. We need more quality on Sunday because we need to win that game and, if we win it, we have two games to get those points and goals we need."

Solskjaer has bemoaned United's fitness levels in recent weeks and again after an early burst, they started to flag as City created a spurt of chances either side of half-time.

"We know what's been going wrong, it's mentality and willingness to run for your team," said United striker Marcus Rashford.

"Forget the top four and the Champions League. We have to get to the bottom of it and start playing like Manchester United for ourselves."

Raheem Sterling shot too close to David De Gea after weaving through a host of United bodies inside the area before Sergio Aguero dragged well wide when unmarked at the edge of the box as City went through the gears towards the end of the first-half.

But it was an enforced change early in the second-half that swung the game City's way as Guardiola boldly introduced Sane when the more defensive-minded Fernandinho went down injured.

De Gea has been a rare model of consistent brilliance as United have fallen behind City in recent seasons.

But the Spaniard's dramatic dip in form of late continued as he could have done better for both goals.

Guardiola's positive change was instantly rewarded when Bernardo cut inside onto his favoured left foot and beat De Gea at his near post.

Sane has been scarcely used by Guardiola of late, but the German, whose winning goal inflicted Liverpool's only league defeat of the season in January, again showed his capability to make a difference in the biggest games.

Sterling led a City counter-attack before feeding Sane, whose powerful shot De Gea could not keep out.

"I like to be critical of him because I know his potential," said Guardiola of Sane. "The way he came in was incredible."

Manchester United English Premier League Football Manchester United vs Manchester City, Game week 31
Get the latest Cricket news, check out the India cricket schedule, Cricket live score . Like us on Facebook or follow us on Twitter for more sports updates. You can also download the NDTV Cricket app for Android or iOS.