The Denmark international set up Sigurdsson's opener in the first half before having a hand in his team-mate doubling the lead after the break. 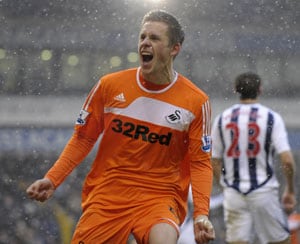 Christian Eriksen made his Tottenham debut and played his part in both of Gylfi Sigurdsson's goals in a 2-0 victory over Norwich at White Hart Lane on Saturday.

The Denmark international set up Sigurdsson's opener in the first half before having a hand in his team-mate doubling the lead after the break.

It meant victory in Spurs' first game since Gareth Bale's official departure for Real Madrid, with Eriksen earmarked as the man to give them creativity in the absence of the Welsh winger.

Eriksen slotted straight into the 4-2-3-1 system Andre Villas-Boas has favoured since arriving at Spurs.

His £11.5 million (13.7 million euros, $18.3 million) signing was the central attacking midfielder and pushed forward whenever Spurs had the ball, often finding himself as advanced as lone-striker Roberto Soldado in attack.

It took him just 12 minutes to make an impression on the game with a excellent piece of skill, nutmegging Michael Turner and Robert Snodgrass before drilling a shot towards goal that required John Ruddy to save.

Soldado pounced on the rebound and cheekily backheeled an effort that came off the post, although Spurs felt Sebastien Bassong had handled on the line.

Bassong, the former Spurs centre-back, was in the thick of the action shortly after when Mousa Dembele created a chance with a run down the left flank.

His pull-back found Soldado but his shot was hacked over the crossbar by Bassong, who was later booked for a foul on the Spaniard.

The hosts were ahead in the 28th minute when Eriksen and Sigurdsson combined for Spurs' first Premier League goal of the season from open play.

Danny Rose started the move with a fierce cross to the edge of the area and Soldado did well to chest into Eriksen's path.

Eriksen pulled off a fine pass to set up Sigurdsson, who swept the ball into the net without breaking stride.

Norwich gave Spurs a scare before half-time when Nathan Redmond raced down the right and got a low cross in.

Ricky van Wolfswinkel had evaded Jan Vertonghen with an accidental trip but his shot was deflected wide by Rose, who had dashed back to cover.

But the visitors' hopes of getting back into the game were virtually ended four minutes after the break when Sigurdsson doubled the lead.

Eriksen was again involved, this time with a crisp pass to Paulinho on the right wing.

The Brazilian's cross was between the Norwich defence and Ruddy, allowing Sigurdsson to tap in.

Sigurdsson also had a long-range effort saved by Ruddy as he chased a hat-trick.

At the other end Rose blocked again to deny Van Wolfswinkel, this time after Spurs failed to clear a set-piece.

Hugo Lloris was lucky to get away with a yellow card after punching outside his box, with Lee Mason choosing not to send off the France goalkeeper for denying a goalscoring chance.

Comments
Topics mentioned in this article
Football Manchester City Tottenham Hotspur Alex Ferguson Christian Eriksen Gylfi Sigurdsson Mark Hughes English Premier League
Get the latest updates on IPL 2020, check out the IPL Schedule for 2020 and Indian Premier League (IPL) Cricket live score . Like us on Facebook or follow us on Twitter for more sports updates. You can also download the NDTV Cricket app for Android or iOS.