It is the first time since 2005 that Manchester United F.C. have gone three games without scoring, which Louis van Gaal admits is a "big concern", and Morgan Schneiderlin has urged his team-mates not to allow the issue to become a fixation. 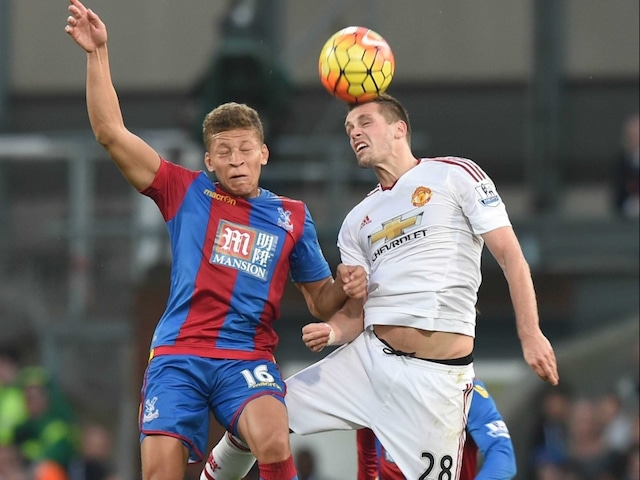 Since Anthony Martial's diving header earned United a 1-1 draw in the reverse fixture two weeks ago, Louis van Gaal's side have registered successive 0-0 draws against Manchester City, second-tier Middlesbrough, who beat them on penalties in the League Cup, and Crystal Palace. (Louis Van Gaal Warns United to End Goal Drought)

It is the first time since 2005 that United have gone three games without scoring, which Van Gaal admits is a "big concern", and Morgan Schneiderlin has urged his team-mates not to allow the issue to become a fixation.

"It's frustrating when you don't win games," the French midfielder told MUTV.

"We have the players to score goals and we will score goals. It's not a worry for me. We've had the chances and sometimes it's just a matter of taking the time to make a good choice.

"It will come if we keep believing. We will keep clean sheets, that's not a problem, and we will win games, but we need to make sure it comes quickly."

United's latest stalemate saw them held by Palace at Selhurst Park on Saturday, where the visitors mustered just a single shot on target.

United's drop in productivity has coincided with Van Gaal's decision to move Martial, the Premier League's Player of the Month for September, to the left flank and utilise Wayne Rooney as a lone striker.

Rooney's dismal form has prompted calls for the United captain to be either dropped or withdrawn to a number 10 role and Van Gaal's tweak in the latter stages at Palace, when Martial went up front and Rooney moved out to the left, suggests the Dutchman may be thinking along similar lines.

Whichever attacking configuration he settles on, Van Gaal will hope it enables his team to register a first ever home victory against Russian opposition.

United drew 3-3 with CSKA when the sides first met at Old Trafford in November 2009 and their two previous home games against Russian teams ended in draws -- 0-0 against Torpedo Moscow in 1992, 2-2 against Rotor Volgograd in 1995 -- that led to early exits from the UEFA Cup.

In total, United have won only one of their eight matches against Russian teams and with the two sides level on four points in Group B, two points below leaders Wolfsburg and just a point above fourth-place PSV Eindhoven, it is a statistic they will be eager to improve on.

CSKA geared up for the trip to northwest England by beating struggling Ufa 2-0 on Saturday to preserve their unbeaten record in the Russian Premier League, which they lead by nine points.

But victory came at the cost of a muscular injury to Ivorian striker Seydou Doumbia, scourge of Manchester City in last season's group phase, who was substituted at half-time and is now a doubt for Tuesday's game.

Playmaker Roman Eremenko is also doubtful, while full-back Vasily Berezutsky has been ruled out with a thigh problem.

CSKA's former United winger Zoran Tosic, who curled in the second goal against Ufa, suggested that his side would approach the trip to Old Trafford with caution.

"Of course CSKA want to win every single match that we play, but when you face Man United at Old Trafford, you can't expect an easy trip," said the Croatian, who was on United's books between 2008 and 2010.

"In case we have a chance to win we'll definitely try to capitalise on it, but I believe nobody will be upset in case of a draw."

United have doubts over Memphis Depay, Antonio Valencia and James Wilson, all of whom missed the trip to Palace, while defenders Luke Shaw and Paddy McNair are long-term absentees.

Comments
Topics mentioned in this article
Morgan Schneiderlin Manchester United English Premier League Football
Get the latest Cricket news, check out the India cricket schedule, Cricket live score . Like us on Facebook or follow us on Twitter for more sports updates. You can also download the NDTV Cricket app for Android or iOS.