Nevertheless it will again put the spotlight on the treacherous conditions -- Spurs' Belgian international Jan Vertonghen faces a race to be fit for the start of the season in three weeks after also injuring his ankle, that in the 3-1 defeat to Sunderland at the same venue on Wednesday. 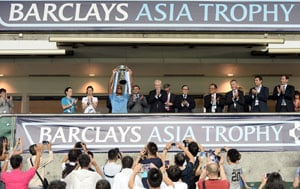 Key defender Matija Nastasic had to be stretchered off Hong Kong's "killer pitch" on Saturday, spoiling what was Manuel Pellegrini's first piece of silverware as Manchester City manager.

Edin Dzeko's spectacular volley from outside the box on nine minutes -- his second goal in two games -- was enough to edge City past a dogged Sunderland 1-0 in the Barclays Asia Trophy final. Dzeko also missed a second-half penalty when he blazed over.

Pellegrini said he did not believe the dire condition of the muddy pitch at the 40,000 sell-out Hong Kong Stadium -- where Manchester United play on Monday -- was to blame for Nastasic's ankle injury.

Nevertheless it will again put the spotlight on the treacherous conditions -- Spurs' Belgian international Jan Vertonghen faces a race to be fit for the start of the season in three weeks after also injuring his ankle, that in the 3-1 defeat to Sunderland at the same venue on Wednesday.

Pellegrini was tight-lipped as to the severity of the injury sustained by Nastasic, who had his hands over his face and appeared to be distressed as he was carried from the field.

"I can't tell you now, the doctor needs to see him tomorrow when we arrive in Manchester and then we can know what has happened to his ankle," Pellegrini said when asked how bad the injury to the talented Nastasic, 20, was.

"We are concerned but it is better to wait. He received a kick to his ankle and the doctor is seeing what it could be, but it is impossible for him to know.

"It is part of the game and could have happened on any pitch."

The former Malaga coach, who took over from the sacked Roberto Mancini last month, added: "We put in a good performance. For me it is important to improve here in Hong Kong compared to South Africa (where City were touring beforehand).

"To play on this pitch was not easy but we always tried to play (good football) and we did well."

Earlier, a ruthless Spurs eased to a 6-0 romp over a hopelessly outclassed South China with Jermain Defoe scoring a hat-trick.

In front of a watching Manchester United manager David Moyes, Defoe made light work of a much-maligned pitch that had players slipping and sliding dangerously after days of heavy rain in Hong Kong.

His Spurs counterpart Andre Villas-Boas said he was pleased to come through the fixture with no more injuries.

"Everything was perfect today and I am extremely happy by the way we finished (the tournament)," said Villas-Boas.

"Today was much better, not only physically, but also the football we played was really pleasant," added the Portuguese, who again refused to say if Spurs had received any offers for star man Gareth Bale, reportedly the subject of intense interest from Real Madrid.

Bale did not play any part in Hong Kong because of a muscle strain but is only days away from a return.

"We really played well throughout," said Villas-Boas. "The full-backs played excellent and kept pushing forward, both (Kyle) Walker and Danny (Rose). It was good to see Defoe coming back to this level of a deadly striker, while also assisting, which shows an unselfish part of his game, which is really good."

Clint Dempsey -- set up by Defoe -- and substitute Andros Townsend also scored, after an own-goal had put Tottenham on their way.

Comments
Topics mentioned in this article
Football Inter Milan Manchester City Matija Nastasic Alex Ferguson Mark Hughes English Premier League
Get the latest updates on IPL 2020, check out the IPL Schedule for 2020 and Indian Premier League (IPL) Cricket live score . Like us on Facebook or follow us on Twitter for more sports updates. You can also download the NDTV Cricket app for Android or iOS.