Malaga boss Pellegrini has been a reported long-term target for City, having previously won plaudits for his work at two other Spanish clubs in Real Madrid and Villarreal. 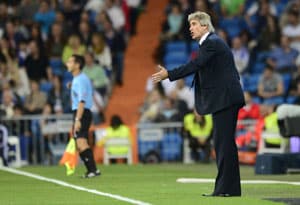 Manuel Pellegrini remained the odds-on favourite on Tuesday to become the new manager of Manchester City after Roberto Mancini was sacked a year to the day since he brought the Premier League trophy to Eastlands.

Malaga boss Pellegrini has been a reported long-term target for City, having previously won plaudits for his work at two other Spanish clubs in Real Madrid and Villarreal.

Several British newspapers carried extensive profiles of Pellegrini even though Monday saw the Chilean try to dampen down speculation by saying: "I deny here and now being the new coach of Manchester City, I haven't signed any agreement with anybody.

There was speculation, too, that if Pellegrini did not arrive at Eastlands, City might bring interim Chelsea boss Rafael Benitez on board.

The former Liverpool manager, who will lead the Blues in their Europa League final against Benfica in Amsterdam on Wednesday, is set to leave Chelsea at the end of this season.

Tuesday's edition of The Times said Mancini would be a man in demand, with French club Monaco leading the chase for the Italian's services, and Paris Saint-Germain, Napoli and several Russian clubs also said to be interested in him.

City's shock FA Cup Final defeat by Wigan at Wembley on Saturday meant they ended this season without any silverware and strengthened rumours that Mancini, who replaced Mark Hughes in 2009, was about to be dismissed.

The club's Abu Dhabi-based owners confirmed Monday the end of Mancini's three-and-a-half-year tenure, with a City statement also talking of a need to "develop a holistic approach to all aspects of football at the club".

This appeared to be a reference to Mancini's supposedly poor communication skills that had seen him publicly criticise players while enjoying a frosty relationship with several senior club officials.

There were reports of tension between Mancini and the Spanish duo of City's chief executive Ferran Soriano and director of football Txiki Begiristain.

When asked earlier in the season if he reported to them, Mancini said: "Txiki and Ferran? They are not above me. Above me there is only Khaldoon (Al Mubarak, the chairman) and Sheikh Mansour (City's owner)."

City are currently a distant second to already crowned English champions Manchester United and 13 points adrift of their local rivals.

The 48-year-old's time at City saw the club win a first major trophy in 35 years with the 2011 FA Cup, while last season's Premier League title was their first top-flight crown since 1968 and saw the manager rewarded with a new five-year deal.

But City's second successive group stage exit in as many seasons from the European Champions League appears to have weighed heavily against Mancini, for all that fans were chanting his name during the FA Cup Final at Wembley.

"All those fantastic memories we have of May 13, 2012 -- that date is a special date for City fans and that's been a little bit tarnished," said the general secretary of the Manchester City Supporters Club, Kevin Parker.

Brian Kidd, Mancini's assistant, will take charge of City's final two matches of the season, starting with the Premier League fixture away to Reading on Tuesday, and a post-season tour of the United States.

The 71-year-old Scot is retiring at the end of the season. David Moyes, currently the manager of Everton, is due to take over at Old Trafford in July.

Comments
Topics mentioned in this article
Football Manchester City Inter Milan Mark Hughes Alex Ferguson English Premier League
Get the latest updates on India vs Australia and check out  Schedule, Results and Live Score. Like us on Facebook or follow us on Twitter for more sports updates. You can also download the NDTV Cricket app for Android or iOS.