Goals from Fernandinho, Yaya Toure and Aleksandar Kolarov in a 3-2 win at Swansea City on Wednesday earned Pellegrini's side another valuable three points in their pursuit of the title. 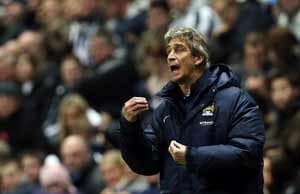 Manchester City manager Manuel Pellegrini is delighted that his side's careless away form in the Premier League has finally given way to a new-found consistency on the road.

Goals from Fernandinho, Yaya Toure and Aleksandar Kolarov in a 3-2 win at Swansea City on Wednesday earned Pellegrini's side another valuable three points in their pursuit of the title.

Having won only one of their first six away games this season, City have now won three of their last four fixtures away from the Etihad Stadium as they continue to keep pressure on leaders Arsenal.

"I'm very pleased because we played against a very difficult team," Pellegrini said.

"Swansea play very good football, away and at home, so to beat them here, in their stadium, is very important for us. I think the most important thing of the performance was the second and the third goals.

"We knew that it would be very difficult for us, but the team had the character to change things. Yaya was very important because he scored the second goal at the right moment.

"I think the key to our improved form away is to continue playing exactly the same way we did at the beginning.

"We didn't lose the games against Cardiff and Aston Villa because we didn't play well; we made a lot of mistakes and conceded easy goals."

Chelsea manager Jose Mourinho has tried to put pressure on City by declaring them clear favourites for the title, but Pellegrini says he is happy that his side are raising expectations.

"Yes, there is pressure, but it's impossible to be in a good team if you don't want pressure. You must be used to playing with pressure," he said.

"I think all the other teams have the same pressure -- Chelsea, Arsenal, Liverpool, Manchester United, Tottenham, Everton. If they want to say that the pressure is on Manchester City, it's no problem for us."

Swansea manager Michael Laudrup, whose injury woes were deepened by the first-half loss of Pablo Hernandez, said: "To concede three goals against a team like this makes things tough.

"I thought we were excellent in terms of our first-half performance and attitude and then to come back like we did was great.

"You always know that if you play teams like this, even if you are on top, they have players that can turn the game in a split-second and that is what happened for Toure's goal."

Laudrup was also delighted with the brace scored by Wilfried Bony, who cancelled out Fernandinho's 14th-minute opener and then struck again in injury time after Toure and Kolarov had put City in control.

"I thought this was by far the best performance we have seen from Bony as a Swansea player," Laudrup said.

On Hernandez's injury, the Dane added: "I don't really know. When I first saw it I thought it was one of those hamstring problems that can keep you out for four or five weeks.

"But the doctors said it may not be bad and maybe it might be like Bony's injury against Valencia, where we thought it would be serious but he was out for just two weeks."

Comments
Topics mentioned in this article
Football Alex Ferguson Mark Hughes Manchester City Swansea City English Premier League
Get the latest updates on IPL 2020, check out the IPL Schedule for 2020 and Indian Premier League (IPL) Cricket live score . Like us on Facebook or follow us on Twitter for more sports updates. You can also download the NDTV Cricket app for Android or iOS.