Manchester United maintained their perfect start to the Premier League season with a 3-1 win over title rivals Chelsea on Sunday. 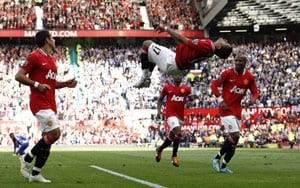 Manchester United maintained their perfect start to the Premier League season with a 3-1 win over title rivals Chelsea on Sunday.

Sir Alex Ferguson's side blew Chelsea away thanks to three goals in the first half from Chris Smalling, Nani and Wayne Rooney.

Fernando Torres reduced the deficit soon after half-time with only his second goal for Chelsea, but later missed an open goal and United could have won by a greater margin as Rooney wasted a second half penalty.

United's victory equalled a club record of 18 consecutive home wins and moved them two points clear of second placed Manchester City at the top of the table and five ahead of third placed Chelsea.

It was Chelsea's first loss under new boss Andre Villas-Boas, who tasted defeat in a league game for the first time since April 2010 when Benfica beat his Academica de Coimbra team.

United, who have made their best start since 1985, took the lead in the eighth minute when Smalling was left unmarked from Ashley Young's free-kick and the defender headed past Petr Cech despite Chelsea's appeals for offside.

Portugal winger Nani increased United's advantage in the 37th minute, cutting in from the right wing before smashing a ferocious 20-yard strike into the top corner.

There was an element of good fortune about United's third goal as John Terry's attempted clearance cannoned off Nani into Rooney's path and the England forward slotted home from close-range. 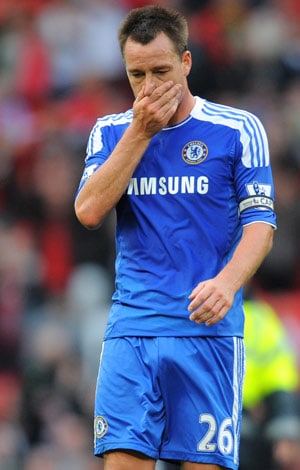 Torres gave Chelsea a glimmer of hope in the 46th minute when he flicked a fine finish over David de Gea.

They had another boost when Rooney slipped while running up to take a penalty, awarded for Jose Bosingwa's trip on Nani, and saw his effort fly wide in an echo of the Terry spot-kick miss that helped United win the Champions League in 2008.

Torres should have pulled Chelsea to within one goal in the closing stages, but the £50 million striker produced an early candidate for miss of the season as he rounded De Gea and somehow scuffed wide with an empty net at his mercy.