Manchester City striker Sergio Aguero will travel to Spain for further tests on a knee injury that threatens his season. 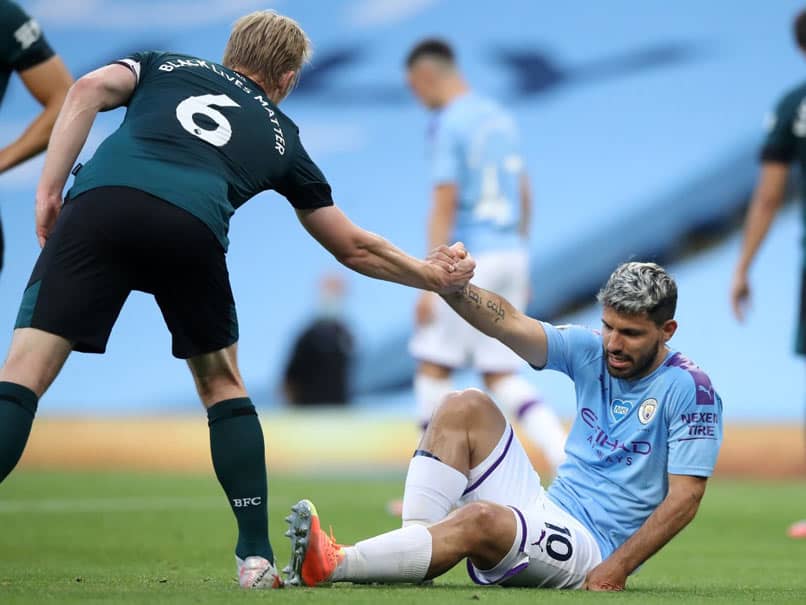 Manchester City striker Sergio Aguero will travel to Spain for further tests on a knee injury that threatens his season. The Argentine aggravated a problem that had bothered him for more than a month during the first half of City's 5-0 win over Burnley on Monday. He was seen clutching his left knee before and after a foul by Ben Mee that earned City a penalty at the Etihad Stadium. After the Premier League clash, City manager Pep Guardiola admitted Aguero's campaign may be over.

In an indication that the problem is serious, City revealed on Tuesday that they are sending the 32-year-old to see Ramon Cugat, a doctor in Barcelona.

"Sergio Aguero suffered damage to his left knee in our recent 5-0 win over Burnley," City said on their Twitter account.

"The striker will now travel to Barcelona to see Dr Ramon Cugat for further examination.

"Everyone at City wishes Sergio the best with his recovery."

Cugat, who has known Guardiola since the manager's days at Barcelona, has previously treated City midfielder Kevin De Bruyne and the club's former defender Vincent Kompany.

"The scans I did this morning have confirmed that I have damaged my left knee," Aguero tweeted.

"It's a pity but I'm in good spirits and so focused to come back as soon as possible. Thank you very much for all your messages!"

Aguero is City's all-time record goalscorer and had netted 23 times in all competitions this season.

Brazil striker Gabriel Jesus is likely to replace Aguero in the starting line-up.

Second-placed City have won both their matches since returning from the Premier League's coronavirus hiatus.

They will play Chelsea at Stamford Bridge on Thursday before travelling to face Newcastle in the FA Cup quarter-finals on Sunday.

Manchester City English Premier League Pep Guardiola Football
Get the latest updates on IPL 2021, IPL Points Table , IPL Schedule 2021 , live score . Like us on Facebook or follow us on Twitter for more sports updates. You can also download the NDTV Cricket app for Android or iOS.