Man City will fight till the last: Milner

James Milner has promised Manchester City will fight for the English Premier League title until they have no mathematical chance of being crowned champions. 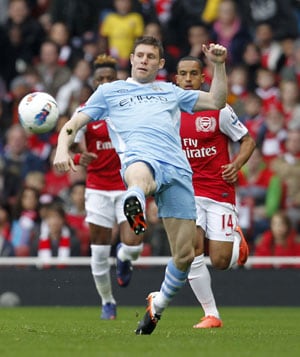 James Milner has promised Manchester City will fight for the English Premier League title until they have no mathematical chance of being crowned champions.

City face mid-table West Bromwich Albion at Eastlands on Wednesday where they will bid to bounce back from the crushing blow of a 1-0 defeat at Arsenal last weekend that appeared to scupper their title hopes.

Roberto Mancini's team led the Premier League from the start of October until March but their slump, combined with United winning 11 of 12 league games, has all but finished their hopes of a first title since 1968.

City manager Mancini went into the weekend admitting that a defeat at the Emirates and a United win over QPR -- they beat the strugglers 2-0 at Old Trafford -- would kill his team's chances.

England midfielder Milner maintains City will attempt to win each of their remaining six matches -- a run that includes a home game against United -- and will fight on until it's impossible for them to take the title.

But Milner said City must learn from the way that their Premier League campaign has fallen apart.

"We'll aim to win our last six games -- as we would have done had we won at Arsenal -- but it is going to be very difficult now.

"Nothing has changed in that respect and we have to target 18 points and six wins so we can end this season on a high -- we'll just have to see where that takes us, but I can promise our fans we'll never give in so long as the title is still a possibility.

"For two-thirds of the season we've led the table and played some great football, but we've not played as well as we can of late.

"That we're not top anymore is down to us and the fact we've not played very well is down to us, too. All we can do is try and get back to winning ways, starting with West Brom on Wednesday.

"We need to learn lessons from this season and take positives from it. We haven't performed to the sort of standards we set earlier in the season.

He added: "We need to learn from this, dust ourselves down and then go into the West Brom game in a positive frame of mind.

"There are six games left -- it's not over and we will be giving everything to make sure we end the season as strongly as possible."

David Silva could return after missing the Arsenal game with a knee problem, with midfielder Yaya Toure suffering a similar injury at the weekend.

The two keepers go head-to-head at Eastlands on Wednesday on the back of contrasting results for their sides over the Easter weekend.

While City lost at Arsenal, the Baggies eased to a comfortable 3-0 victory over Blackburn Rovers which virtually guaranteed their Premier League status.

Foster starred with a string of fine saves and Ridgewell, who also played with both him and Hart at Birmingham, insists the Baggies stopper belongs in the same league as Hart despite his decision to withdraw from England duty.

Ridgewell said: "Fozzy (Foster) did it for his own reasons, wanting to prolong his career with his injuries. If he keep playing like that, hopefully he will keep going.

"England have got two great keepers in Joe Hart and Ben. I've played with them both and there is not much between them and they are two great goalkeepers.

"I think Ben had a few injuries and just wanted to concentrate on his club career and he has been fantastic since."

Baggies manager Roy Hodgson is awaiting news on the fitness of Jerome Thomas (knee), while Zoltan Gera, James Morrison (both knee) and Steven Reid (foot) are set to miss out.

Comments
Topics mentioned in this article
Football Wayne Rooney Chelsea Manchester United Arsenal Mark Hughes Alex Ferguson Manchester City James Milner Inter Milan English Premier League
Get the latest updates on India vs Australia Series, check out the India vs Australia Schedule for 2020-21 and Ind vs Aus live score . Like us on Facebook or follow us on Twitter for more sports updates. You can also download the NDTV Cricket app for Android or iOS.