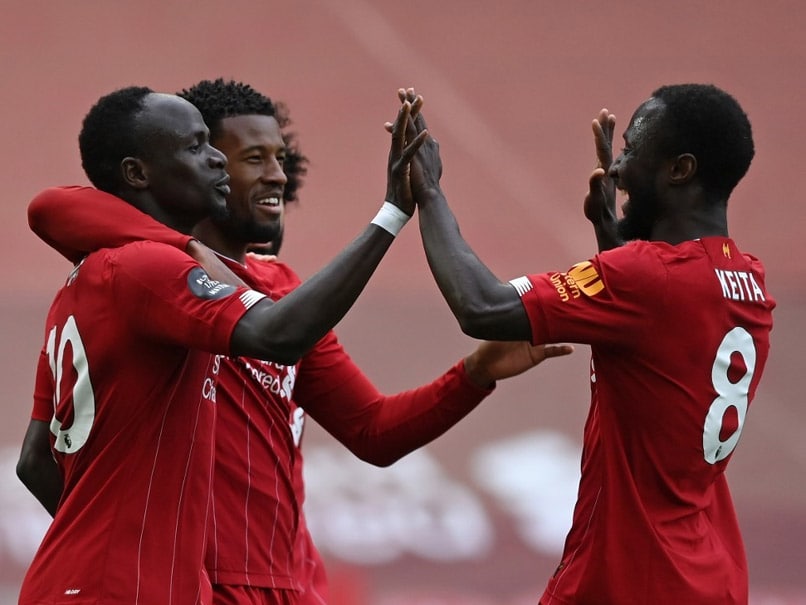 Sadio Mane broke the deadlock for Liverpool in the 71st minute.© AFP

Sadio Mane helped Liverpool keep alive their bid to set a new Premier Leaguepoints record as the champions beat Aston Villa 2-0, while struggling West Ham twice blew the lead in a draw at Newcastle on Sunday. Jurgen Klopp's side are hoping to break Manchester City's Premier League record of 100 points and second-half strikes from Mane and Curtis Jones ensured they still have a chance to shatter that mark.

Back at Anfield for the first time since clinching the English title last week, Liverpool were lacklustre for long periods as they looked to bounce back from Thursday's 4-0 thrashing at Manchester City.

But Senegal winger Mane broke struggling Villa's stubborn resistence in the 71st minute, smashing Naby Keita's pass in off the underside of the crossbar from close range.

Mane's 20th goal in all competitions this season was followed by Jones' 89th-minute strike.

Jones netted from 12 yards for his first Premier League goal, just 24 hours after the promising midfielder signed a new contract.

Villa remain in the relegation zone, one point from safety as they battle to avoid an immediate return to the Championship.

At St James' Park, Newcastle hit back twice after West Ham looked set to take control to secure a 2-2 draw.

Shock winners against Chelsea in midweek, West Ham were ahead within four minutes at Newcastle.

Michail Antonio's clever flick allowed Pablo Fornals to find Jarrod Bowen with a fine pass, and when Jamaal Lascelles failed to cut out his cross, Antonio pounced at the far post.

Newcastle were level after 17 minutes as the influential Allan Saint-Maximin slipped in Emil Krafth.

Krafth's driven cross was turned past Lukasz Fabianski by Miguel Almiron for the Paraguay midfielder's eighth goal of the season.

After earning their first away point since December, West Ham are four points clear of the relegation zone with five games left to guarantee their top-tier status.

John Egan's first top-flight goal gave Sheffield United a 1-1 draw at Burnley as both teams' hopes of qualifying for the Europa League were dented.

James Tarkowski put Burnley ahead just before half-time, but Irish defender Egan netted with 10 minutes left, giving him a goal in all four divisions in England.

United remain in eighth place, four points behind sixth-placed Wolves, while Burnley move up to ninth, two points adrift of the Blades.

In the second half Rodriguez brought a good save from Dean Henderson, but McNeil shot wastefully wide from the rebound with just the keeper to beat.

It was a costly miss as United equalised in the 80th minute.

Ben Osborn's cross was flicked on by Billy Sharp and Egan was left unmarked to fire home with a fine finish at the far post.

West Ham United Sadio Mane Jurgen Klopp English Premier League Football
Get the latest updates on Fifa Worldcup 2022 and check out  Fifa World Cup Schedule, Stats and Live Cricket Score. Like us on Facebook or follow us on Twitter for more sports updates. You can also download the NDTV Cricket app for Android or iOS.