Tottenham were the victims of a controversial goal reversal in their 3-1 defeat against Sheffield United on Thursday. 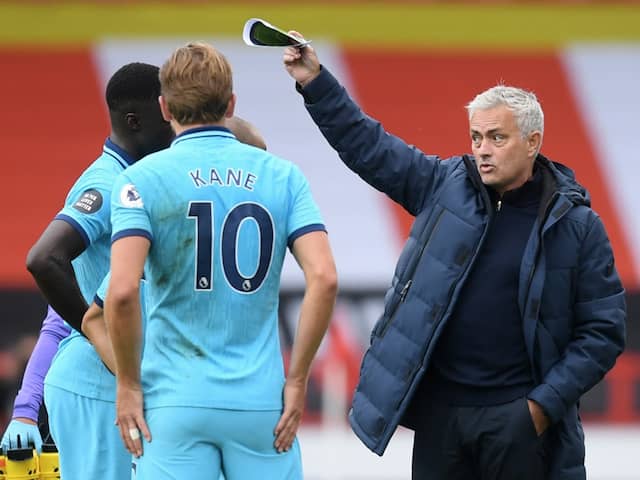 Jose Mourinho said he fears for the future of football if the system is not addressed.© AFP

Jose Mourinho claimed VAR will make fans fall out of love with football after Tottenham were the victims of a controversial goal reversal in their 3-1 defeat against Sheffield United on Thursday. United took the lead through Sander Berge's first half strike at Bramall Lane. But Tottenham were denied an equaliser moments later when Harry Kane's goal was chalked off by VAR for a dubious handball against Lucas Moura. Lucas appeared to have the ball kicked against his arm in the build-up to Kane's strike and Tottenham manager Mourinho complained angrily on the touchline.

Lys Mousset and Oli McBurnie rubbed salt into Mourinho's wounds as they both netted for United after the interval.

Kane's last minute goal was no consolation for Tottenham, who are now in grave danger of missing out on next season's Champions League.

In a Premier League season marred by VAR making debatable calls too often, Mourinho said he fears for the future of football if the system is not addressed.

"I can only say that normally I'm a professional guy on the bench in these moments, I never complain at the guy with the whistle because it's not the referee any more," Mourinho said.

"This is the start of everything. I think the referee should always be the man on the pitch and the people in the office should just support and assist.

"That's not the way it is. The referee who is not very good on the pitch, we cannot expect that he's good in the office.

"We're going in a direction that's really bad for the beautiful game, the game that everybody fell in love with."

United manager Chris Wilder backed Mourinho, saying: "I have got a back catalogue of decisions that have gone against us. We are the unofficial champions of Europe on VAR decisions going against us.

"I can understand their manager's frustrations. I would be super frustrated. It's a nonsense rule, it wasn't intentional."

Tottenham sit nine points behind fourth placed Chelsea and seven adrift of fifth placed Manchester United after their first defeat since the restart.

"We have to be mentally stronger to cope with what happened during the game. We cannot mentally die after Michael Oliver's decision," Mourinho said.

"With 50 minutes to go we have to be stronger. That's my criticism to my team in the second half."

The Blades, winners for the first time in five games following the hiatus, moved two points above Tottenham into seventh place, keeping alive their hopes of qualifying for European action.

Mourinho's headache started when Berge put United in front in the 31st minute.

After spreading the ball wide to Chris Basham, Berge broke into the Tottenham area, collected the return pass and drilled his low shot into the far corner.

Tottenham thought they had equalised two minutes later as Lucas sprinted forward and, despite being pushed over, managed to knock the ball onto Kane, who cut inside and fired home.

Kane's celebrations were curtailed when VAR disallowed the goal for a handball by Moura, who had the ball kicked against his arm as he tumbled under pressure from several United players.

Ben Osborn was making his first Premier League start and the United midfielder had a key role as they struck again in the 69th minute.

Breaking into the area, Osborn's deft pass picked out Enda Stevens and he squared for the unmarked Mousset to slot home from close-range for his first goal since December.

McBurnie put the result beyond doubt when he tapped in from Berge's cross in the 84th minute after more sloppy Tottenham defending.

Tottenham Hotspur Sheffield United English Premier League Football
Get the latest Cricket news, check out the India cricket schedule, Cricket live score . Like us on Facebook or follow us on Twitter for more sports updates. You can also download the NDTV Cricket app for Android or iOS.