Jones scores as Villa go down to Manchester United

Phil Jones scored his first goal for Manchester United in its 1-0 victory at Aston Villa on Saturday to stay five points behind rival Man City at the top of the Premier League. 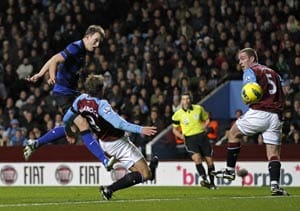 Phil Jones scored his first goal for Manchester United in its 1-0 victory at Aston Villa on Saturday to stay five points behind rival Man City at the top of the Premier League.

United dominated the opening 45 minutes despite the early loss of Mexico striker Javier Hernandez who was stretchered off with a left ankle injury. United manager Alex Ferguson said Hernandez could be out for four weeks

Jones scored in the 20th, picking up a cross from Nani on the left and deftly side-footing a close-range volley past Villa goalkeeper Shay Given.

It was the 19-year-old Jones' first goal in any competition for United since his offseason move from Blackburn.

Villa has won just one of its last 32 league matches against United, which has been unbeaten in the league at Villa Park for 16 years.

After Hernandez was injured, Jones got permission to go forward in midfield with Michael Carrick operating in the holding role. Chris Smalling also did well in shackling Villa's most potent threat in Gabriel Agbonlahor for long periods.

Villa also had injury problems with Given (leg) and Jermaine Jenas (ankle) both stretchered off.

Villa looked more threatening in the second half but could have no complaints with the outcome.

Hernandez appeared to twist his ankle when it became caught in the Villa Park surface after turning sharply. There was a lengthy delay while Hernandez received treatment but he was unable to continue and was replaced by Antonio Valencia.

It came as no surprise when Jones put United ahead with a clinical finish. Patrice Evra released the overlapping Nani and his cross was met by Jones who used the pace of the ball to give Given little chance.

Villa could not get a foothold in the game and it needed a fine save from Given to prevent United doubling their lead.

Young provided the probing cross from the right of the area and Nani's powerful header was turned aside by the Republic of Ireland 'keeper.

There was a brief moment of danger from Villa when Barry Bannan ran on to a reverse ball from Agbonlahor inside the United box but he over-ran the ball.

But United was the dominant force and Valencia curled a 25-yard effort just wide after no Villa player closed him down.

In the 38th Given had to be replaced by American Brad Guzan - making only his second Premier League appearance - after hurting his leg when racing out of his area to clear.

The second half began in the same vein as the opening 45 minutes with United dominating proceedings.

Wayne Rooney tried his luck from 25 yards out and his shot skidded just past the post.

Bannan made a crucial block on Nani's shot from near the penalty area, then Anders Lindegaard clung onto a teasing cross-shot from Agbonlahor in a rare Villa attack.

Jenas became the third player to be substituted after 64 minutes with a serious-looking ankle injury and he also had to be stretchered off.

Villa substitute Emile Heskey, in his 500th Premier League appearance, almost made an instant impact as he headed wide at the far post after Richard Dunne had flicked on a corner from Bannan.

Young dragged a low 20-yard effort only a couple of feet wide after brushing off the challenge of Bannan.

But Villa was at last showing some menace with Lindegaard turning over James Collins' header.

Young curled a shot straight at Guzan after good play by Ryan Giggs but could not score against his former team before being substituted after 78 minutes.

Rooney had a quiet afternoon but was just too high with a snap shot after exchanging passes with Carrick.

Substitute Danny Welbeck had the ball in the net in the 90th minute but had strayed offside.