Chelsea lifted the Champions League trophy two months after Villas-Boas left Stamford Bridge but his successor, Roberto Di Matteo, lasted only eight months in the job before being dismissed. 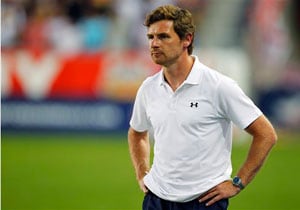 Tottenham Hotspur coach Andre Villas-Boas has taken issue with his predecessor Harry Redknapp's remark that only a "real dope" could fail to make a success of the Chelsea manager's job.

Villas-Boas was appointed Chelsea coach in June 2011 but lasted only nine months before being sacked in March last year after a poor run of results left the Blues in fifth place in the Premier League table.

Shortly after taking charge at QPR, Redknapp told reporters that only a "real dope" could fail at Chelsea due to the resources at the club's disposal, but Villas-Boas said that the Englishman was not in a position to comment.

Asked to respond to Redknapp's remarks, Villas-Boas said: "Only if you manage a club you are going to find out.

Villas-Boas also admitted that he has never had a proper conversation with Redknapp, either before or after his appointment at Spurs.

Chelsea lifted the Champions League trophy two months after Villas-Boas left Stamford Bridge but his successor, Roberto Di Matteo, lasted only eight months in the job before being dismissed.

The Spaniard was barracked by supporters after Chelsea lost 2-0 at home to Swansea City in the first leg of their League Cup semi-final on Wednesday and Villas-Boas said he was not surprised.

"I was booed. It's a consequence of the demands of the job," said the former Porto manager.

"Chelsea is a high-profile club where media attention is high and everything is scrutinised and it's a different type of environment.

"This (Tottenham) is a high-profile club but with different circumstances, different players, and different objectives, and not so much media attention."

Comments
Topics mentioned in this article
Football Chelsea Manchester City Tottenham Hotspur Queens Park Rangers Mark Hughes Alex Ferguson English Premier League
Get the latest updates on ICC T20 Worldcup 2022 and CWG 2022 check out the Schedule, Live Score and Medals Tally. Like us on Facebook or follow us on Twitter for more sports updates. You can also download the NDTV Cricket app for Android or iOS.