City had taken the lead through Samir Nasri in the fifth minute but Spurs staged a remarkable late comeback through goals from Clint Dempsey, Jermain Defoe and Bale, who had missed the last two games through injury. 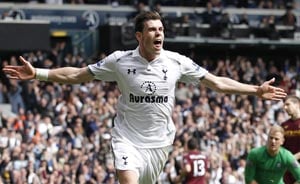 City had taken the lead through Samir Nasri in the fifth minute but Spurs staged a remarkable late comeback through goals from Clint Dempsey, Jermain Defoe and Bale, who had missed the last two games through injury.

Tottenham remain in fifth place, but are just two points behind third-placed Arsenal with a game in hand.

Defeat for City, meanwhile, means Manchester United will reclaim the title from their near neighbours if they beat Aston Villa at Old Trafford on Monday.

This win will provide a major boost for Tottenham, whose bid for a Champions League place had taken a turn for the worse since victory over Arsenal in the north London derby last month had cemented their hold on third place and moved them to within two points of City.

That gap had increased to 10 points ahead of Sunday's game and, more importantly, Andre Villas-Boas' side had dropped out of the top four.

Little wonder, then, that the return of Bale was greeted enthusiastically, after the Wales international missed two games with an ankle injury sustained in the Europa League quarter-final against Basel.

But any optimism generated by Bale's early contribution soon disappeared when Nasri put the visitors ahead after just five minutes.

City were back in north London seven days after their FA Cup semi-final victory over Chelsea at Wembley and their confidence was clear.

Manager Roberto Mancini had made five changes to the team that beat Wigan Athletic in the mid-week dress rehearsal for the FA Cup final, but there was no sign of any lack of cohesion as the visitors easily unpicked the Tottenham defence.

Carlos Tevez's powerful run towards the byline on the right stretched the home defence before the forward slipped the ball inside for James Milner.

Nasri was the focus of attention again three minutes later, this time for a high challenge on Kyle Walker that went unpunished but could easily have earned the France international a red card.

Walker recovered after treatment but the early goal deflated Spurs and their play lost impetus, with Bale operating on the periphery of the action.

A clever pass from Dempsey brought the home side their first real opening, but that was squandered by Kyle Walker.

It was clear Villas-Boas needed to find a way to lift his team, but with Emmanuel Adebayor ineffective in the lone striker role against his former club, Tottenham's attack lacked bite.

The Spurs manager eventually made his move on the hour, introducing Tom Huddlestone and Lewis Holtby, 10 minutes before swapping Adebayor for Defoe.

The equaliser came in the 75th minute when Bale played a superb cross with the outside of his left boot across the face of the City goal, where Dempsey finished from close range.

Four minutes after the leveller, Defoe finished superbly, curling a shot beyond Hart after collecting Holtby's through ball.

The atmosphere had been completely transformed and Bale capped an impressive recovery with an equally fine finish, clipping the ball over the advancing Hart after being picked out by Huddlestone's pass.