Christian Benteke gave Liverpool the lead in the 26th minute. However, Bournemouth felt that in attempting to play the ball before it reached his team-mate, Philippe Coutinho had been offside 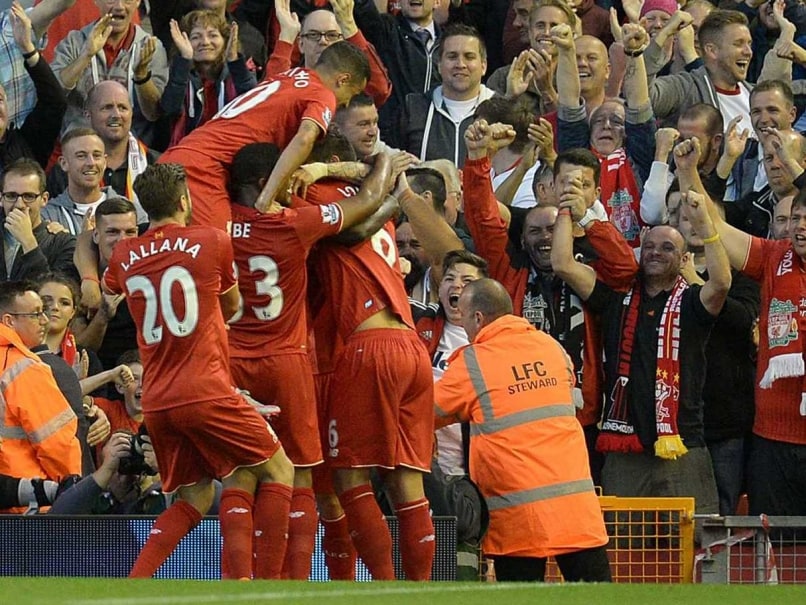 Liverpool players celebrate after taking the lead vs Bournemouth in the English Premier League.© AFP
Liverpool:

Christian Benteke scored a contentious first Liverpool goal as his team shaded promoted Bournemouth 1-0 at Anfield on Monday to claim their second victory of the Premier League season.

The teams' first ever league meeting was settled by £32.5 million ($50.8 million, 45.8 million euros) striker Benteke's 26th-minute strike in front of the Kop, but Bournemouth felt that in attempting to play the ball before it reached his team-mate, Philippe Coutinho had been offside.

Having previously won 1-0 at Stoke City in their opening game, Brendan Rodgers's Liverpool moved level on points with Manchester City, Leicester City and Manchester United at the top of the two-game table.

"Thankfully the goal counted and we're happy to get the win," said Rodgers.

"I'm pleased we've got two wins, six points and two clean sheets. The defensive organisation has been good. There's a lot of players coming into the club and it'll take them a wee bit of time to bed in."

As well as Benteke, who later hit the crossbar, Rodgers also gave home debuts to Nathaniel Clyne, James Milner, Joe Gomez and substitute Roberto Firmino, but lost new captain Jordan Henderson to a foot injury early in the second half.

Bournemouth have lost both of their first games, but manager Eddie Howe will have been heartened by the pluck and enterprise shown by his side, who also had a goal by captain Tommy Elphick disallowed.

"It is hugely frustrating for us," Howe told Sky Sports. "We were in the game and the big decisions have gone against us.

"The new offside rule is a grey area. Under the new rules, that is clearly offside. Our goalkeeper was affected by the player in front of him."

The last time Bournemouth had played at Anfield, in an FA Cup replay in January 1968, it was under the banner of Bournemouth and Boscombe Athletic, but they were quick to make themselves at home.

It was the away fans who made all the noise in the early stages and in the fifth minute they thought they had a first ever top-flight goal to celebrate, only for Elphick's header to be ruled out after he was adjudged to have used Liverpool centre-back Dejan Lovren for leverage.

"If that is a free-kick then we will see free-kicks every time there is a corner," said Howe.

Playing with a new directness first seen at Stoke on the opening weekend, and with an unchanged team, Liverpool looked to hit Benteke at the earliest opportunity.

The former Aston Villa hitman struggled to make the ball stick, but after lashing wide from the edge of the box, he opened his Liverpool account by stabbing Henderson's left-wing cross home from close range at the back post.

The goal, however, should not have stood.

Coutinho made a clear attempt to play the ball in front of visiting goalkeeper Artur Boruc and according to new guidance on the offside rule recently introduced by rule-making body the International Football Association Board, the Brazilian was offside.

For Bournemouth, the goal had the doubly unfortunate effect of galvanising their hosts, who finished the half with a flourish.

Henderson, Steven Gerrard's successor as skipper, grazed the bar with an improvised shot from distance and was then unfortunate not to win a penalty for a barge by Max-Alain Gradel, while Coutinho curled a loose ball wastefully wide.

Matt Ritchie sought to sound the revolt for Bournemouth with a couple of potshots early in the second half, but although Liverpool lost Henderson to injury, with Emre Can taking his place, they continued to threaten, Milner scuffing wide from Jordon Ibe's drilled cross.

The visitors refused to be cowed, though, with Ritchie crashing a shot against the outside of the post and Eunan O'Kane ruffling the side-netting.

Simon Francis threatened an equaliser with a header that landed on top of the net, but Benteke went even closer at the other end with an effort that hit the bar.

Comments
Topics mentioned in this article
Christian Benteke Liverpool Bournemouth English Premier League Football
Get the latest updates on SA vs IND 2021-22, check out the Schedule and Live Score . Like us on Facebook or follow us on Twitter for more sports updates. You can also download the NDTV Cricket app for Android or iOS.