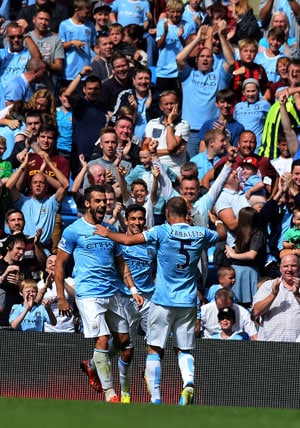 Manuel Pellegrini's side were labouring in the sunshine at the Etihad Stadium and had to endure several nervous moments before the former Sevilla striker made the breakthrough 20 minutes into the second half.

A sumptuous last-minute free-kick from Yaya Toure settled matters, but after their shock 3-2 loss at promoted Cardiff City last weekend, City once again showed there was plenty of room for improvement.

"It was hard work. Every match is going to be hard work," said City manager Pellegrini.

"Hull defended very well. We know you have to give 100 percent to win every match, but I think today that we were more concentrated in defence than the last game against Cardiff."

City made two changes to their starting XI, with fit-again Matija Nastasic replacing Javi Garcia in central defence and Aleksandar Kolarov coming in for Gael Clichy at left-back, while Danny Graham took the place of suspended striker Yannick Sagbo for Hull.

It was the visitors who made the brighter start, and Sone Aluko should have done better than drag the ball harmlessly wide of the right-hand post after breaking clear in the eighth minute.

Hull goalkeeper Allan McGregor produced sharp saves to repel headers from Kolarov and Joleon Lescott, but there was another scare for the hosts when Danny Graham had a volley chalked off for offside.

Pellegrini introduced new signing Negredo in place of the ineffective Edin Dzeko at half-time and the Spaniard almost made an immediate impact, only to completely miscue his header from David Silva's lofted pass.

Negredo would not be denied, however, and in the 65th minute he broke the deadlock with a firm downward header from Pablo Zabaleta's floated right-wing centre.

It had been an arduous afternoon for the 2012 champions, but Toure added a layer of sheen to the result by bending a 22-yard free-kick over the wall and in off the crossbar in the 90th minute.

"You know that Achilles heel we have got -- can we score?" said Hull manager Steve Bruce.

"We've had really good possession, played well, created the chances, can we score the goal? Unfortunately, we've created enough but we haven't been able to score and that's the difference at this level."

Elsewhere, it was an uneventful day in the English top flight, with only three goals scored in the four mid-afternoon matches. 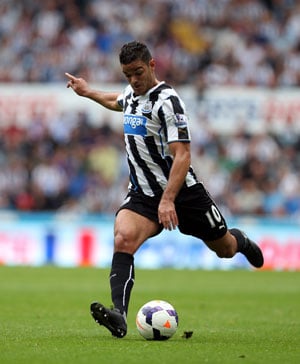 Unsettled Newcastle United midfielder Yohan Cabaye made his return as a second-half substitute against Fulham at St James' Park but it was another Frenchman, Hatem Ben Arfa, who proved the match-winner in a 1-0 victory.

The former Marseille winger drifted in from the right before rifling a spectacular shot past goalkeeper David Stockdale in the 86th minute to give Alan Pardew's side a first win of the season.

Stoke City also left it late before inflicting a first defeat of the season upon West Ham United at Upton Park, with Jermaine Pennant scoring the game's only goal from an 82nd-minute free-kick.

New signing Nathan Redmond earned Norwich City a 1-0 win over Southampton, cutting in from the left and drilling a low shot into the bottom-left corner mid-way through the second half at Carrow Road.

Cardiff, meanwhile, followed up their shock win over Manchester City with a 0-0 draw at home to Everton.

Sunderland visit Crystal Palace in the late game, having announced the signing of South Korea midfielder Ki Sung-yueng on loan from Swansea City earlier in the day.

Two of English football's most enduring fixtures take place on Sunday, with Manchester United manager David Moyes taking his side to Liverpool for the first time and Arsenal hosting Tottenham Hotspur in the north London derby.

Chelsea and Aston Villa are not in action this weekend due to the London club's participation in the European Super Cup, which saw them beaten on penalties by Bayern Munich in Prague on Friday.