Manchester United mounted yet another rescue mission, beating Sheffield United 3-2 to maintain their perfect away record in the Premier League this season. 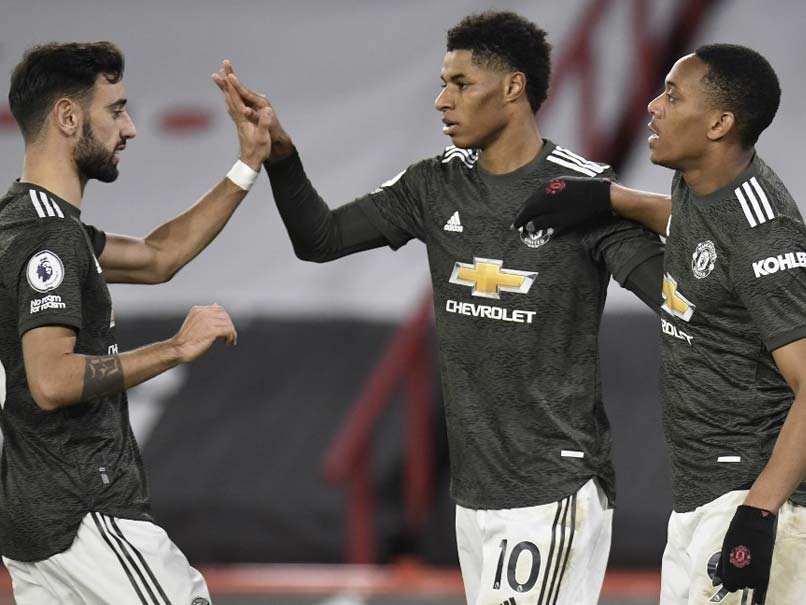 Manchester United mounted yet another rescue mission on Thursday, beating Sheffield United 3-2 to maintain their perfect away record in the Premier League this season. Ole Gunnar Solskjaer's Jekyll-and-Hyde team now have 18 points from six matches on the road -- coming from behind to win each one of them. Two goals from Marcus Rashford and an Anthony Martial strike lifted United to sixth in the table, five points behind leaders Liverpool with a game in hand. But Sheffield United are staring into the abyss -- with just one point to their name, Chris Wilder's side have fewer points after their first 13 games of a league season than any other team in English top-flight history.

The visitors outclassed Sheffield United for long periods at Bramall Lane but faced a nervy final few minutes before celebrating their 10th consecutive away victory in the league.

"It wasn't comfortable at all towards the end," Solskjaer told the BBC.

"We made it difficult for ourselves again after a slow start but then we played some brilliant stuff. When they get that second goal it's not comfortable at all."

"We need to sharpen up at home," added the Norwegian, whose side have won just one of their six matches at Old Trafford this season.

"Sunday (Leeds at home) will be a massive test for us. It's a big derby. We've been waiting for years to get this game on."

Sheffield United started brightly as Manchester United struggled to find their rhythm and it was no surprise when they scored just their sixth league goal of the season in the fifth minute.

Dean Henderson, picked in the United goal in place of David de Gea, was caught in possession by Oliver Burke, who scrambled the ball to David McGoldrick to tap home.

It was a head-in-hands moment for Henderson, who excelled on loan at Bramall Lane last season.

The home side had a golden chance to double their lead but John Fleck put his left-foot shot wide of Henderson's right-hand post.

Manchester United started to find their stride as the half wore on, with Bruno Fernandes and Paul Pogba pulling the strings from midfield.

They were level in the 26th minute when Rashford bent his run to perfection to stay onside, instantly controlling Victor Lindelof's long ball with his right foot before lashing home.

Seven minutes later United were ahead. The impressive Pogba picked out Martial on the right of the penalty box.

Goalkeeper Aaron Ramsdale failed to deal with the ball, which bounced kindly for the Frenchman, who poked home.

The visitors, also boasting Mason Greenwood in a multi-pronged attack, looked dangerous every time they swept forward but Sheffield United had attempts of their own through Burke and McGoldrick.

Manchester United extended their lead early in the second half.

Pogba cut out a misplaced throw-in, turned smartly and produced a lovely pirouette to start a break from deep in the United half.

Referee Michael Oliver allowed play to continue when Greenwood was fouled in the middle of a fine team move that ended with Rashford firing underneath a diving Ramsdale, who should have done better.

United appeared to be in cruise control but McGoldrick headed home from a corner in the 87th minute to make life uncomfortable and Henderson had to dive to his right to keep out a powerful shot by substitute Lys Mousset. But the visitors clung on for the win.

Earlier, Aston Villa and Burnley played out a 0-0 draw. Villa are in 11th place while the point lifted Sean Dyche's men out of the bottom three.

Manchester United Sheffield United Marcus Rashford Anthony Martial English Premier League Football
Get the latest updates on IPL 2021, check out the IPL 2021 Schedule and Indian Premier League Live Score . Like us on Facebook or follow us on Twitter for more sports updates. You can also download the NDTV Cricket app for Android or iOS.